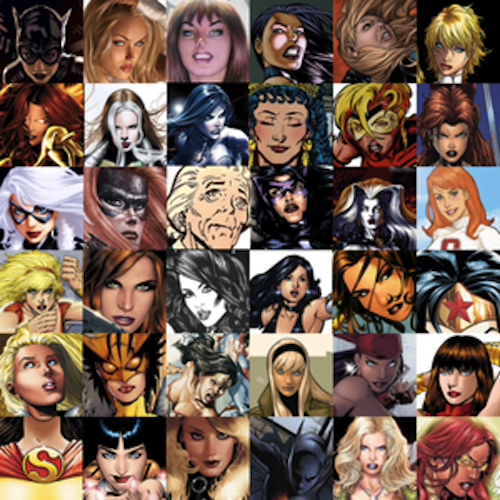 As I’ve mentioned before, NYCC had panels on just about everything. But one of the more prominent topics, covered in a variety of panels, was definitely the issue of misogyny in comics.

Yes, there are ladies in comics. However, most of the major comic book characters are still male, and quite a few different parties have accused comics in general of limiting women to over-sexed second-string characters, or mere vehicles for plot development. And in the real world, there are waaay fewer female comic creators than male comic creators, especially if we’re talking about the big two (the big DC panel I went to had one lady, and the big Marvel panel had none).

We’re gonna get a little Op-Ed-y here (emphasis on the Op). Listening to all of the different panels on the subject, the general consensus seemed to be that there aren’t enough realistically-portrayed empowered women in comics. I agree. Naturally, the nature of comics means that there are some arcs in various series with great women, and each creator has a limited impact over the overall trajectory of a character or franchise. That said, in general, women in comics are primarily secondary characters, and even when they do have their own series, they are still portrayed as pin-up-y, and very obviously constructed to serve the male gaze (look who remembered something from college).

One of the scholarly papers presented on the topic—Women in Tights: Absent Power of the Subjugated, by Evan Johnson—pointed out that women in comics are often punished for their physical powers by being unsexed (Hey Lady Mac, how you doin’?). Johnson also noted that the power ascribed to female superheroes is often deemed “mysterious,” relegating women to the role of the witch. Johnson’s primary examples were Marvel’s Scarlet Witch and She-Hulk.

Personally, my issue is that there are more noteworthy female super villains than there are female superheroes, that females in comics are often made to apologize for their powers through blatant physical punishment (they’re crippled, raped, etc), and that I can’t think of a single female in mainstream comics who has ever gotten an arc half as good or heavily promoted as Superman’s in Red Son, Batman’s in Hush, or Captain America’s in Civil War.*

I can also think of way too many female characters in comics who just make no sense (I’m not even talking about costumes and gravity no sense-making right now). Women are people. I know, I’m just a silly lady full of hysterical crazy talk today. What I mean is that women are flawed just as much as men are, and are just as smart, and just as capable. Not all comic book women need to kick butt and never mess up—let them make mistakes, but let them exist in a world that reflects the variety and emotionality of real people. Make them more than archetypes of Vixens, Badass girls, Damsels in Distress. Give them backstories and character motivations beyond their relationships to their male counterparts. Please and thank you.

So… gender inequity exists in the world of superheroes. So what? What do you want to do about it? Complain some more? Nope. Let’s just have more female comic creators, and try to convince the members of the boys clubs to write better females. One of the coolest panels on this topic was about Womanthology.  Womanthology is a comic anthology created by women, and sold for charity. As you might guess, there are a variety of short comics (written and illustrated by women), but there are also contributions from young girls looking to break into comics, as well as interviews and How-to’s from established women in the industry. So far, over 140 women have been involved in the project, and according to some of the creators, it’s been making people less surprised to hear about female comic creators. …So that’s awesome. The first book, Womanthology: Heroic, has met with some pretty impressive success, and a new five-issue edition, Womanthology: Space, has been ordered. If you’re interested in taking a look at Womanthology, you can look for it in your local comic book store or any of the usual book-buying places.

*If we’re not talking mainstream, I know that many people would argue for Death in Gaiman’s Sandman comics.