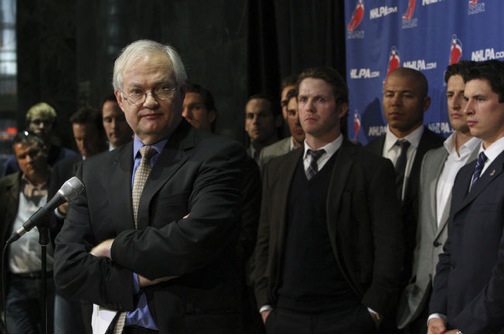 The NHL lockout is almost three months old and the NHL owners are holding steadfast, eager to stick it to the players like they did in 2004. The players have made some rather impressive offers and concessions, but we’re not seeing any of that from the owners this time around. Gary Bettman and the NHL seem to be all take and no give this holiday season, and that’s just not cool with me, nor should it be with the NHLPA.

I think the time has come for the NHLPA to try something new: decertification of the union and taking their case to court. It’s time to take the NHL and their outrageous demands to an antitrust courtroom.

Decertification is considered the nuclear option, but one that was used by the NFL and NBA players unions and in those cases, the move was credited with bringing their lockouts to a premature end. If the NHLPA wants to get out of this without giving away everything, this is how you bring the NHL back to the table to some serious negotiations. If the NHLPA wants to get a fair shake and bring this lockout to an end sooner rather than later, they need to end negotiations and decertify.

I don’t think the NHL wants to go this route, so just the mere threat of decertifying could hasten negotiations and possibly bring the lockout to an end. There is word going around that the NHLPA doesn’t have the minerals to make such a drastic action and might call their bluff. If this was anyone but Donald Fehr running the show, I might agree… but if this man threatens to decertify, he wont’ be bluffing. I can’t see the NHLPA going too deep into a lockout without having a backup plan in place.

You have to imagine after the success other unions have had with this tactic that the NHLPA has had this ace up their sleeve since the very beginning. The NFL lockout was rumoured to last as long as two years, but the NFLPA decertified about a week before the lockout even began and that derailed any chance of it lasting that long. The matter went to court and the owners were forced back to the table a lot earlier than they wanted to be.

Without a union to negotiate with, a league couldn’t have a collective agreement, which means basic elements of the NHL such can be challenged at anti-trust court. The salary cap, limiting free agency by age or playing time can all be challenged under anti-trust, something the NHL would never want to see happen. All the progress the NHL made with the last lockout, especially the limit on how much a player can make per year can be considered ‘price fixing’ which is an enormous no-no in anti-trust courts. Negotiating with a union is just as beneficial for the NHL as it is for the players, so decertifying the union and challenging the NHL’s improper business format in court is the next logical step for the NHLPA. It’s the next logical step, especially if the NHL isn’t negotiating in good faith.

Unlike Major League Baseball, the NHL doesn’t have antitrust exemption so this move could work in the NHLPA’s favour. It’s a gamble however for both the NHL and the NHLPA which is why many players are not in favour of the move. This could end the lockout earlier or extend it for another season, which could result in the loss of more than one year. Not exactly something you want to hear but that’s how intense these negotiations have become.

If the NHL is being just half as hard assed as the press is reporting, the NHLPA might have no other option. To use a hockey metaphor, it’s time to drop the gloves and fight. The NHLPA has to decertify.