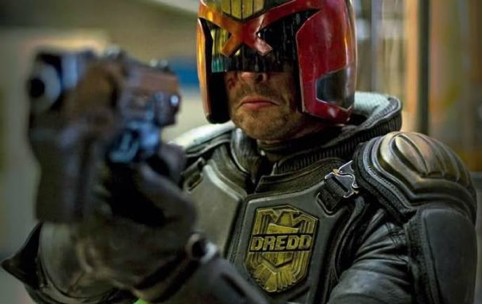 When you walk into any movie based on the infamous comic known as Judge Dredd, most movie goers are well aware that they are not going to see academy award winning material here. What you can expect and get plenty of- and then some- is hard hitting action that takes no prisoners, oodles of blood and guts and some interesting kill scenes that will have you squirming in your seats. Compared to the first film based on this comic book (that stared Stallone as the brutal Judge) this movie is an enormous improvement that has a simpler storyline and is more loyal to the comic book, which is sure to please all fans who were not impressed with the first film.

At the center of attention is Karl Urban (Star Trek’s Dr. McKoy) as Judge Dredd. While his portrayal of the Judge is a little more basic, less is truly more as Urban gives just want the fans want and expect from this character, nothing more. Not afraid to act through the entire picture without taking his helmet off once (even to dress his own bullet wound) Urban is spot on as Dredd. He is like a machine without a hint of emotion as he delivers a nice, cold serving of Justice. He’s a brutal man, but clearly the guy you want to be with when the bullets start flying. The film’s humanity comes from his partner, the rookie named Anderson who is being reviewed by Dredd to see if she has what it takes to be a Judge. Her yin to Urban’s yang make for quite the coupling as they both work together within the deep maze that is the gigantic peach tree housing facility to bring justice to the lawless.

Another surprising performance in this movie came from it’s villain, the character known as ‘Ma-Ma’ played rather nicely by Lena Headey (300, Sarah Connor Chronicles). She’s more than just your average gang leader, with a history of being abused and rising to the top on her own before messing with the wrong Judge. The focus of the film centers around drugs being used in the big futuristic city, especially this new drug featured in the film that seems to make time slow down to one percent of its actual speed. This makes for some pretty gory scenes as some are seen at that drug’s speed, kind of like watching an action movie through a high speed camera. All this drug use and gore makes it easy to see why this movie got its 18+ R rating.

While I had a lot of fun watching Dredd, especially in 3D, I have to post a warning. This film is not for kids and viewers should exercise caution before letting anyone under the age of fifteen check it out. If you’re cool with that, sit back and enjoy the film as it’s one of the best action films of 2012. While you won’t see it get any Oscar nominations, sometimes there is nothing like sitting back and enjoying a good ass whooping. Sometimes you just want to see the good guy tear the bad guy a new one, and with that in mind… Dredd delivers.