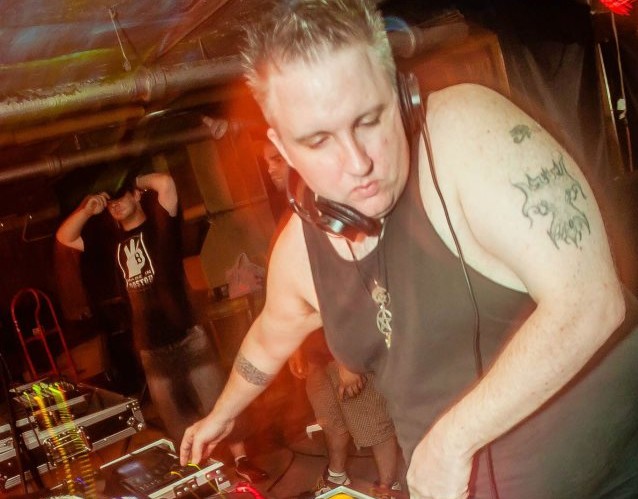 DJ Tim Bernyk hails from Boston, MA and has recently begun spinning live again since taking a break to raise his son, Sean. After missing a quarter of his set due to a long wait, I finally caught DJ Tim in action for a good 45 minutes. We talked after his set for a few minutes. Here’s what I was able to get out of him.

How much hair gel does it require to keep your hair up?
Not much.

Can you tell me three major influences?
Brian Eno
Brian May
Giorgio Moroder

When did you first start spinning? How did you get into it?
I started spinning in ’98, but I’ve been playing music for a lot longer.  I started playing guitar at age 11. Spinning was something I was always interested in so I bought Technics SL-1200MK3D’s and a Pioneer DJM500 Mixer and started practicing.

The equipment has changed a lot in the past decade.  Vinyl was the main medium DJs spun in the late 90’s, what do you use now?
Cdj’s caught up to manipulating like vinyl. I started out spinning just vinyl, but there have been a lot of strides in the past few years so now I can use my digital library and eventually get into using software which will ironically get me back on the vinyl decks.

Do you have a secret as to why you came back so strongly?
I wouldn’t say I’m back strong but that depends what you mean by that. I’m essentially starting over after many years but even back then, I was in obscurity. I stopped spinning before I really took off. I knew I was going to get back into it but I honestly didn’t think it was going be this long. I suppose you could say I stopped spinning live while I was paying my dues and now that I am back, I have to repay those and pay some more but that’s the way it is. The more dues you pay, the sweeter it is when you get to where you want to be.

I’ve never stopped spinning, I’m always practicing. I have my own space in the basement where I can get away after work and practice. My son, Sean, loves to come down and see what I’m up to.

Does Sean show an interest in music like you?
Yes, he likes to look on when I am spinning. He has varied taste in music. Right now, he likes Iron Maiden, The Beatles, Combichrist, Gary Numan, Wolfsheim, Pentagram and drum and bass. He’s starting to harmonize along with whatever is on. When he’s driving with his mum, he enjoys top 40. I think he is going to be a vocalist and would play drums if we had them, which I will be getting for him soon. He likes to tinker with a keyboard too.

You consider yourself a serious DJ, but do you believe the term ‘DJ’ has a negative stigma associated with it and if so how can we change it? It seems like everyone is a DJ these days.
You have an uphill battle in terms of negative perceptions. I happen to take it seriously. I’m not doing my job unless I’m liquefying someone’s vital organs. I can’t really say what would “change” the perception of djing. I can only ensure that I will take it seriously by mixing well and eventually releasing my own tracks. I also know that I’m not just a dj. I’m a music fanatic, a musician and a song writer. I can sit under a tree or in a subway and pluck a song out of a guitar, so that is what keeps me secure and grounded. Nobody can take that away from me. I can only concentrate on what I will do to evolve, create a moment in time for people and enjoy the music that I am playing. I figure if I can at least do those 3 things then I won’t perpetuate any of the negative stereotypes.

Any advice for the beginner?
For me the key is knowing as much as I can about music.  Pick up an instrument; learn how to write music without the use of a computer. Listen to different types of music, not just electronic music. I love electronic dance music just as much as I love classical, jazz, metal etc.  Absorb it all. I feel it helps me be a good musician and from that a good DJ.

Like DJ Tim Bernyk on Facebook to stay up to date on new material and live sets. If you love dancing and live close enough to Boston, you don’t want to miss a set! You can catch him spinning House, Trance, Techno, Goth/Industrial/EBM, Psytrance, or a mix of everything depending on the night.