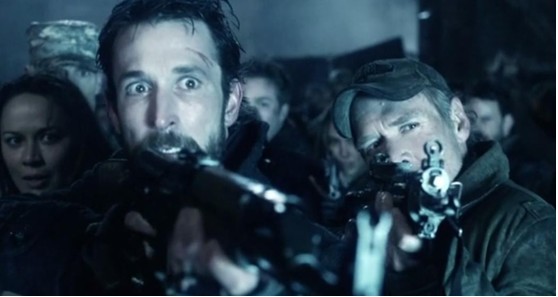 The summer provided some great television for those who were not in the mood to spend their every waking moment watching sports. While many summer shows had some solid seasons, in my personal opinion the best season finale of the summer was hands down, without a shadow of a doubt, the Falling Skies season two finale. It was another long season for the 2nd Mass, and they lost a few key members along the way, but the troops managed to score a huge victory over their alien invaders. The last episode of the season also ended with an enormous cliff-hanger that will no doubt have people talking until season three starts next year. This season has been a roller-coaster ride for the show’s fans: from Tom’s brief negotiations with the Overlord to the true intentions of the Red Eyed alien and his rebellious skidders, this has been a very impressive season for TNT’s science fiction thriller.

Tom Mason and Captain Weaver led their troops through hell to make it to the underground compound in Charleston, North Carolina… only to find out that the people over there are just as split over what they should do next. In the end, Mason and company teamed up with Red Eye and the rebellious skidders to attack an outpost where an overlord was rumoured to be lurking. It was learned through Red Eye that each overlord is in charge of a specific division and that, out of fear of leaking information, there is no backup of the knowledge they possess. Thus killing an overlord means that whatever info he holds (be it civil projects or military tactics) dies with him and the result is chaos amongst the aliens in that region. Attacking the outpost and successfully killing the same overlord who Tom spoke with at the beginning of the season was a fine payoff for season two. This all lead to the cliff-hanger that came at the very end of the episode.

Tom and Capt. Weaver had just informed the leader of the Charleston compound that the 2nd Mass was not going to stay and go back out to the front line to keep fighting. As they were leaving that meeting, the compound began to shake. Once outside, we all watched as another race of aliens fell from the skies (fitting given the title of the show) and landed before our heroes. As the show came to a close, we were left to wonder the ultimate question: are these new aliens friends or foes? Will they attack the humans, or offer to help fight their oppressive overlords?

If you look at previous scenes from the episode, the answer might be a little clearer. When the 2nd Mass conducted their mission to kill the overlord in the finale, it didn’t take a rocket scientist to realize that the aliens were constructing a massive ray gun that was pointing at the sky. The only reason why you would make a gun that big would be to repel invaders who might try to steal your newly occupied turf. Seems reasonable, right? This could lead one to suggest that the new aliens are not on good terms with the overlords who currently occupy Earth. This could mean these new aliens are friends and will help. Maybe…

Just because these new aliens are not friends with the current occupiers does not mean they’re friends to the humans either. This could just be a case of one alien race trying to take over and keep the resources of the planet for themselves. This could make things very, very sticky for the humans that remain on Earth. Do they trust the new aliens and try to work with them to defeat the overlords? Doesn’t really seem like a choice since the other option would be two alien races to fight instead of one. After playing Starcraft for years on my PC, I can testify that taking on two alien races from two fronts is not pleasant… and I had more firepower to work with than these humans do. For this reason, I’m rooting for the new aliens to be friends… though I’m not too sure about anything at this point.

Regardless of what side the new aliens fall on, their presence is a game changer for Falling Skies. Either the series is going to get better with the addition of the new race or it could clear jump the shark and be the beginning of the end for what is the best Sci-Fi series we have to work with right now. There is one thing I can say about the season finale we just watched, it’s going to keep fans talking and guessing about what’s going to happen next for a long time, and that’s what a season finale is supposed to do. Falling Skies ended their season with a bang and the best cliff-hanger of the summer, and I personally cannot wait to see more.

Season 3 of Falling Skies will air in June of 2013, which is only nine months away.