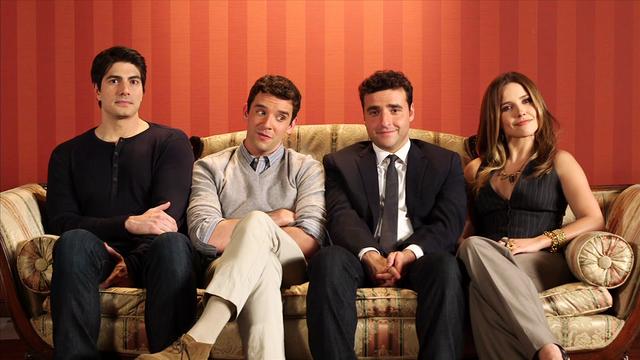 I can’t stop smiling. Really, you’ve got to believe me, no pilot has made me this unexpectedly* gleeful in recent memory. I love Partners. I love it. It’s hilarious and heartfelt and just nostalgic enough to hit that allusive brand of happiness that almost nothing else can.

First of all, I love the concept. My mother’s business partner was gay and the concept of having to distinguish between “life” and “business” every time Jane introduced her to an acquaintance always made me laugh. I also love that creators Max Mutchnick and David Kohan have put a lot of themselves into Louis and Joe, respectively. The beloved creators of Will & Grace have been friends for decades and their one-gay one-straight odd-couple dynamic makes perfect sitcom fodder (not to mention they naturally write the characters well, because they’re based not only on themselves but on each other- does that make sense?). The set up of the show is great and there aren’t any two writers in Hollywood I’d rather have at the helm of this one. The whip-smart, reference-heavy (Louis’ dog is name Elphaba!), character-based comedy of Will & Grace fits into Partners with just enough of an update to survive in 2012’s sincerity-phobic society. The pilot of Partners is uncompromisingly sweet in its foundation of friendship and even truly romantic at one small moment involving Joe “going with his gut”. That’s an oldschool concept for a sitcom. I love that Mutchnick and Kohan aren’t afraid to return to the tone of their previous hit, even bringing the iconic James Burrows on board to direct. Partners may go down for being too old fashioned, but I think the writing is sharp enough that you’d have to be truly cynical to make that complaint.

Partners is adorable sweet funniness from start to end with only a few jokes that don’t make the grade (the repeated “I’ve got a heart on” being the most obnoxious). It’s otherwise brimming with fresh fun, the vast majority of which is delivered by the incomparable Michael Urie in his Long overdue return to TV post-Ugly Betty. Michael Urie is amazing, I adore him. He’s Julliard- trained, theatre-savvy and does a mean podcast (dear CBS- Partners podcast? Please!). He’s also just adorable-meets-hilarious in the absolute perfect way to pull off the flamboyant role of Louis. Now, I say flamboyant, and you know this is a KoMut production, but I urge you to fight off all visions of Jack McFarland that enter your mind, because Michael Urie is far and away superior to Sean Hayes and Louis is, so far, entirely more nuanced than Jack. Jack’s not even that terrible, but it’s Very important to me that you know just how fantastic Louis is comparatively speaking (or really even not comparatively speaking). He’s so much more lovable than The New Normal’s iteration of the same archetype and, in Urie’s hands and as written by Mutchnick and Kohan, he’s allowed to be a full-fledged human being who cares about more than just his own gayness. (I’m also happy to report that the odd-couple set up is more about the awkwardness of marrying a guy in a bromance than marrying a guy with a gay best friend. It’s JD and Turk, one of them just happens to be gay because there are people who are gay, it’s not the show’s Entire Reason For Existing. Yes, I’m talking to you Ryan Murphy).

Urie’s the star of the show, but David Krumholtz isn’t far behind him as Joe, Louis’ business partner and best friend. Krumholtz is on a roll lately with parts that have made me love him, and Joe certainly keeps that trend going. He’s funny, obviously, and establishes a sturdy chemistry with Urie while differentiating his comedic rhythm from his co-star’s. But what most stands out about Krumholtz in the pilot (and this also goes for Urie) is his dedication to the stakes. When Louis and Joe’s friendship is threatened, Krumholtz holds his scene as if it were a Jason Katims drama instead of a CBS sitcom. It was genuinely sad and honestly moving in the same way that Will and Grace’s famous falling out was (kudos to the writers for their uncanny skill for drama within comedy). Sophia Bush (whom I adore) and Brandon Routh are still dramatically underdeveloped, but if the character development that’s gone into Louis and Joe is any indication, we won’t have to wait long until they’re bonafide breakouts (though I do worry that Routh’s Wyatt is being cornered as “the dumb one” already).

The pilot of Partners is one of the best I’ve seen in years. Or, at least, it’s one of my favourites in recent years. And I can only see it getting better from here.

*I say “unexpectedly” because The Mindy Project is exactly what I was hoping/sure it would be.