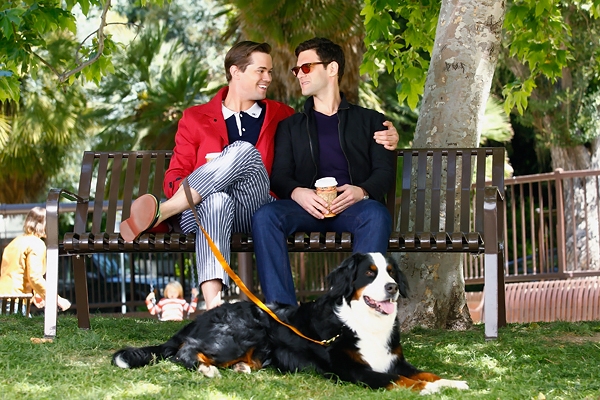 Okay, let’s keep this simple. The New Normal is generally well written- though full of Ryan Murphy hangups and predictability- and has an incredibly charming cast, highlighted by central couple Justin Bartha (as David- a practical, sort of nerdy, endlessly sweet, perfect man) and Andrew Rannells (as his flighty, dramatic, quick-witted partner- Bryan). I was quite fond of both Bartha and Rannells pre-New Normal but I have to say that David and Bryan do show them off really well. Bryan is too much sometimes (read: most of the time) but in his occasional moment of vulnerability, Rannells absolutely nails it (effectively breaking my heart every time).

The rest of the cast is made up of Georgia King (Goldie- the surrogate David and Bryan hire when they decide to have a baby), Bebe Wood (Goldie’s goofy/weird daughter Shania), Ellen Barkin (Goldie’s racist/homophobic/generally nightmarish Grandmother), Jayson Blair (Goldie’s no-good husband Clay), and, bizarrely, NeNe Leakes (Rocky, Bryan’s assistant). Shania is mostly a subplot driver at the moment with over-the-top quirk built in to give Bryan more moments of relatability (they’re bonded because they’re “special”. I find it unfair that David is not considered special, but whatever) and Goldie is predictable and boring. But Ellen Barkin is a hoot and a half as a cartoon bigot. She’s sort of like Sue Sylvester but better written and more relentless. A moment in the most recent episode when she and bitchy-but-kind Bryan say the same thing at the same time is Amazing (the look of horror on her face is priceless). Clay is useless still, but NeNe Leakes is kind of my favourite character in the supporting cast. She’s a little ridiculous, but I love that she’s not fussed about random bigotry- she just shoots it a disbelieving and almost mocking look that appropriately turns the speaker into the butt of their own joke. She’s no-nonsense and as of yet not overused, which is key.

Also, there is a dog. The cutest dog ever on TV, actually. David and Bryan’s full-grown Bernese Mountain Dog is all sorts of cuddly, lumbering adorableness. But they also have a Bernese Mountain Puppy! I’m obsessed with Bernese Mountain Dogs- you might have noticed- so even if the Murphy-isms wear me down I will watch The New Normal until its cancellation day, a little for Bartha and Rannells, and A Lot for the dogs!

Now, about those Ryan Murphy-isms. UGH! Dude. Come on. Can’t you let your characters be real people and not soap boxes for you to stand on? The moment in the most recent episode when Bryan breaks down because he’s worried about their child being arbitrarily hated like they are, is actually really touching (mostly because Rannells Kills It) and I like the twist on David’s similar story when he stands up for a mentally disabled man with whom he’s over-associating and the guy turns around and called him a derogatory term. It’s laugh-out-loud funny (mostly for the surprise and timing of it) and one of the only times Murphy has ever let a character with a natural disadvantage be something other than a martyr. But the whole premise of the show is fundamentally insecure. It’s all about telling Americans that everyone should be considered “normal” instead of just making the characters normal. This is An NBC Primetime Sitcom- what they present as normal is generally accepted to be normal, or even ideal. All The New Normal has to do to make its point is make David and Bryan relatable people- tell stories about parenting that make sense to middle Americans to whom homosexuality might not make sense, make them funny and flawed and just entertaining guys that the audience wants to invite into their homes every week. And I think David and Bryan are that. They’re adorable (at least they are when Bryan isn’t too much of a scarf-loving caricature). But so far every episode has been about how “special” people don’t fit in and how gay dads Can be good dads, etc, etc (the pilot even had a series of interviews with parents who wouldn’t normally be considered “normal”, or I guess the show doesn’t think they’re considered normal). The show so far is all about the problem existing and how unfair that is, but Murphy and co are actually in a uniquely powerful position to be part of the solution. Don’t tell the people who are wrong that they’re wrong, show them that Bryan and David are awesome and they’re being cruel idiots to think otherwise based on a single adjective like ‘gay’.

Most of the major problems with The New Normal feel like things that can be sorted out with time and comfort. Unless the characters are destroyed with basic bad writing (see: Glee) or the references become so kitschy-forced that the real story disappears (see: episode 2’s amusing but inorganic Grey Gardens motif- yet another example of Murphy’s focus on self-described “gay things” over honest and original character detail for Bryan), The New Normal should be okay. They just need a show of faith from NBC, something that tells the writers that they’re not going to be rejected just for telling a story that some people don’t like (Modern Family‘s still going strong, and it played the 2-dads-and-a-baby story years before this). The New Normal needs to relax, and not worry about being taken down by the hate that gets thrown at David and Bryan, because people who don’t like The New Normal because it’s about gay dads are jokes. The people who don’t like The New Normal because it’s created by Ryan Murphy? Totally justified; he’s insane. But the people who don’t like it because it features gay people, are hilarious. I mean, also scary and terrible and in need of major help, but at this point I’m mostly just laughing at them. (Aside: Does no one else adore the fact that Utah refuses to air a show starring Andrew Rannells? Andrew Rannells! As in “Hello, my name is Elder Price” (yes I know Book of Mormon mocks the Church of LDS, but it does so with great fondness and most Mormons actually really responded well to it, at least according to Parker & Stone) *End of Aside*). The New Normal needs to like itself more, and come to the conclusion that if people dislike it for the wrong reasons then they’re not people they want watching in the first place. Because if they keep trying to win the wrong people over, more and more viewers will start to dislike the show for the right reasons.