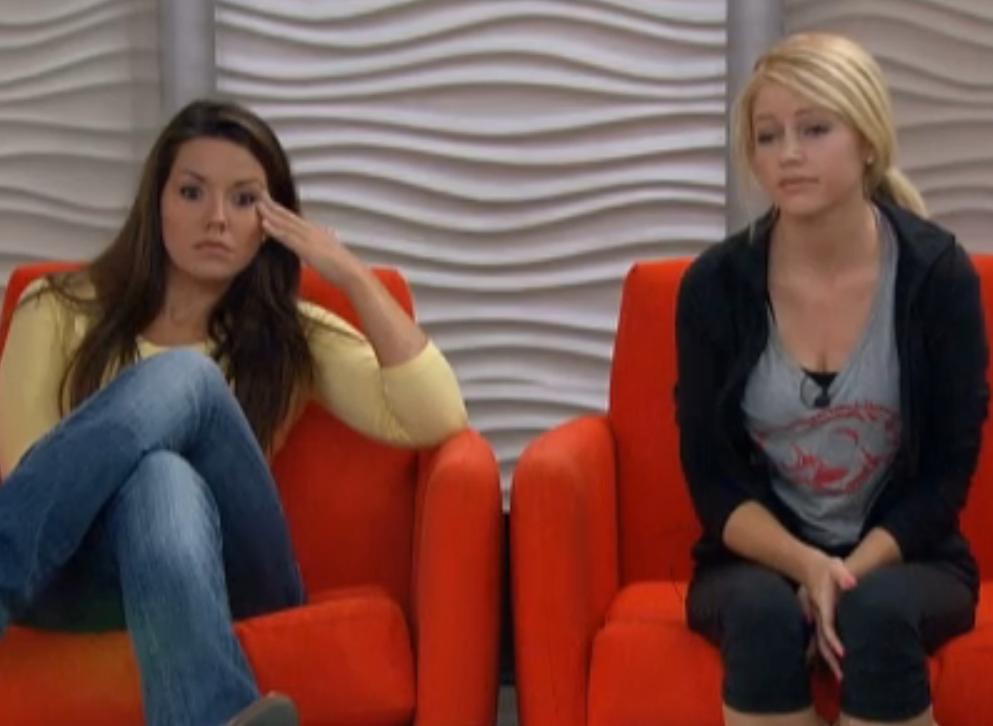 Ladies and gentleman, I spoke too soon.

It was just a few days ago when I wrote:  “Britney’s in a great place because if the veto is used by anyone, she should be safe this week.” I, like the rest of Quack Pack, put way too much trust in alliances. After a brutal week, and some impressive game play, Britney was sent packing last night.

My initial reaction was one of complete disdain. As a die-hard Britney fan, it was excruciatingly painful to watch her break down and be betrayed for the second time in her Big Brother career. The moment Jenn played the Veto to save Dan, you could see the look of defeat on Britney’s face. In that split second she figured out that Dan had stabbed her in the back. Alas, I could go on and on about how terrible it was to watch Britney’s death in the game or go on and on about how much of a despicable human being Dan is, but I will not. Instead I want to take the time to congratulate two players on a job well done and share my pick for this season’s potential winner.

First, it goes without saying that Dan deserves some respect this week. He may be the shadiest player this game has ever seen, but he really did resurrect himself. That solitary confinement was a blessing in disguise as Dan was able to craft a brilliant plan. It’s apparent that he was making some of it up as he went along (I don’t believe for a second that he intended to save Danielle this week, I think he just saw how hurt she was by his betrayal, and used Frank’s willingness to collaborate as a means of bringing Danielle back to his inner circle). While Dan deserves all the credit for getting Britney out, he couldn’t have done it without Frank and Jenn’s stupidity (more on that later). Regardless, Dan is responsible for, arguably, the best move ever made in Big Brother history. He will continue to go down as one of the best players, and we’ll have to wait a few weeks  to see if he actually is controlling this game.

Second, I have to give a shout out to Britney. I’ve never seen an episode edited and executed so wonderfully in favor of one player. I think I’m not alone in admitting that Britney was the best player to watch this season and that she showed her true colors as an all-star of the game. Even Julie Chen has openly stated that she thought Britney had a good chance at winning. Britney had her moment of initial weakness when the tears came out after her nomination, but she utilized the rest of the week to bash Dan. She was not going to leave the house without making a statement, and she did it in a way that came across as …funny! Britney used her humor to expose Dan’s true nature and she placed an even bigger target on his back. What was even more impressive about Britney’s exit this week was her interview with Julie. Britney came out of that house working the crowd and gave one of the most poised and respectful interviews of the season. This girl deserves more than another shot at the Big Brother house, and I have a feeling the pop culture world hasn’t seen the last of this charmingly funny gal.

Lastly, because I love lists so much, here’s my take on the final players and who I think will take home the grand prize.

7/ Joe-Janelle’s favorite player left in the game may be the most trustworthy, but he hasn’t done enough to secure himself a win. The newly formed alliance of Dan/Danielle/Frank/Jen will likely target Shane and Ian this week (if they win HOH) so Joe should have some time left in this game, but I wouldn’t be shocked if we see him walk out that door next Thursday. The last live eviction saw a good-for-nothing player leave the house, so Joe might follow suit. Also, Joe fell out of the HOH competition in like two seconds….come on.

6/ Jenn- I realize she may have “made a big move” this week, but in reality she was Dan and Frank’s puppet. Jenn cannot seriously think she had anything to do with this decision. In fact, she stupidly aligned herself with the number one physical threat and the number one mental threat in this game. Even if one of them takes her to the final two, Jenn has zero chance at winning. Also, she quickly fell out of the HOH competition after Joe (I mean, seriously, these two cannot do a thing in this house).

5/ Shane- I’m still dealing with the after-math of Britney’s vote, so I may be a bit harsh on Shane, but the guy has no brains. He could have single handedly kept Britney in this game but instead chose to believe Dan’s tirade against Danielle, and keep his showmance in the house. Had Britney stayed, she and Dan would have fought it out as the two major power players. Britney would have been Dan and Frank’s number one target with Ian being target number two. Shane could have easily slid into the final four. Unfortunately, Frank does not have a mind of his own in this game so I think his days are numbered without Britney. And if he does make it to the final two, his lackluster public speaking skills will cost him the half million.

4/ Frank- The guy probably deserves to win at this point, but I can’t see it happening. He’s not in HOH this week or next (due to the punishment from the veto competition). Without HOH, Frank has to win veto to save himself. He clearly cannot rely on the alliance with Dan as Dan has proven to be a selfish, backstabbing Judas (yet again!). If Frank can continue saving himself AND make it to the final 2 with Jenn, he will easily win the game. I just don’t see that being a likely possibility.

3/ Dan- If Dan wins this game, they should just cancel any future editions of Big Brother. They will never again find a better player. It will also prove how completely moronic this entire house is. Dan is easily the least trustworthy player and any opportunity to backdoor him can and should be used.

2/ Ian- I debated putting Ian this high on my list. The bottom line is that Ian has a clear shot of winning if he makes it to the finals. The guy is awkward, weird, and nerdy as hell but he’s pretty beloved by most of the house. He certainly has been trying to make a name for himself over the past few weeks, and I do believe the jury will respect that. Ashley and Frank are really the only two people who may hold a grudge against Ian. His lack of physical skills could convince the house to go after Frank, Dan, or Shane before they oust him. Ian’s life in the game depends on the HOH competition and as of Thursday night he had a one in four shot of winning.

1/ Danielle- I think she’s the dark horse in this game. Nobody sees Danielle as a significant threat to win, yet she’s one of the only people to win an HOH and veto.  Danielle kicked butt at the last endurance competition so she should have an easy shot at HOH this week. Her newly secret alliance with Dan might help her out a lot. If Shane or Ian wins HOH they will want to immediately target Dan or Frank, but if Dan wins HOH he’ll likely keep his partner safe. With so many power players left in the game and some drama still lingering from the whole Ian debacle, Danielle should easily slide into the final four. I just hope she has enough guts to turn on Dan before he turns on her. A Danielle/Shane final two would be pretty awesome, and would easily lead to a Danielle win.