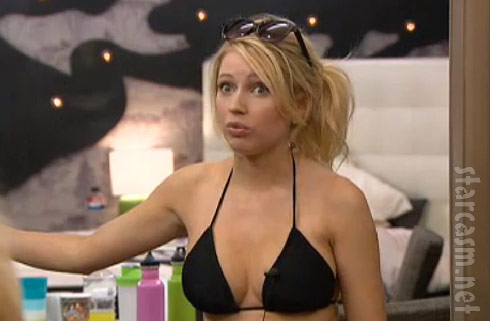 When Big Brother introduced the coaches twist this season, I was a bit reluctant to jump on board. Part of the reason was that I was frankly sick of Mike Boogie on my television screen. There are few people on reality television who come across quite as cocky and self-centered as he does. I’ve always had a tremendous amount of respect for Dr. Will, but his less-than-stellar sidekick just seemed plain mean. The other three coaches, I was super happy to see (even if the entire online community felt that Britney was an undeserving coach, I certainly didn’t mind since she gives the BEST diary room scenes). Alas, Boogie-hatred aside, my biggest issue was that I really did not want to watch some of the greatest players of the game sit and not partake in said game. It seemed like a waste of talent and, more importantly, like it was just a ploy to bring them back into the game and create a future twist. Not surprisingly, they were given the option to stop coaching and actually play and the game was reset. Since the reset took place, I must admit that the game has been a lot more interesting.

The Quack Pack quickly rose to become a powerful alliance over the past few weeks. Well, honestly the Shane/Danielle/Britney/Dan alliance has had control of most of the game anyways, but the addition of Ian initially only helped to solidify their name (which by the way, I find perfectly awesome and not at all the worst named alliance to date). Ian thought he was the mastermind of the Quack Pack and felt that he was such a villain for turning on Boogie in Frank. In reality, Ian ended up making the stupidest move this season by outing himself as the traitor AND giving Boogie enough time to tell Frank. What followed was the most hilarious live episode ever, when you could almost see Ian peeing his pants as he tried to finally oust Frank from the game.

But, alas, Frank is a beast. He may also be cocky and arrogant and in every respect the protégé of Boogie, but you have to admit the guy is kicking some butt in competitions. So when Frank took himself off the block, you could smell the defeat amongst the Quack Pack members.

Sunday’s episode found Frank winning HOH as he continued to dominate the competitions. The Quack Pack began to scramble, and we witnessed what is easily one of the best episodes this season. True colors were revealed, a major power player stepped up their game, and Pandora’s Box created quite the cliffhanger.

Pandora’s Box and the true colors: Frank opened it. Won some cash. And surprise! A second veto is in play this week.  The houseguests quickly caught on that the new veto was in the claw machine and we got to see the Quack Pack peck at one another for the first time this season. What was most surprising was Dan’s downright dirty play. Just one week ago, Dan was seriously impressing me with his calm and collected avoidance of the Boogie/Frank drama. As the two Chilltown(ish) members bashed him in front of the entire house, Dan quietly sat still and read his book. I was in awe at how well he conducted the whole situation and really applauded his character. Flash forward to the surprise veto competition, and Dan lost any and all respect. He lied to his alliance about getting the veto, basically fought with Ian the whole time, and came across as a competitive, whiny brat. I was shockingly happy to see Ian take the veto, even though I went into the competition wishing it would go to Britney or Danielle.

So now that Ian has the veto, a huge cliffhanger has me anticipating tonight’s veto competition (sidenote: I use “cliffhanger” in a loose way). With Dan and Danielle both on the block and Ian holding on to the veto, it’s possible that the entire Quack Pack could be safe this week. All it will take is for Britney or Shane to win the veto and the little ducklings are in another week. This is, of course, assuming both Ian and the 2nd veto are allowed to play their vetoes at the same ceremony. Ian can save Dan and Britney/Shane could save Danielle, forcing Frank to put up either Jenn, Joe, or Britney/Shane. If all goes well, the Quack Pack stays in the game.

In other big news this week, the best player this season finally stepped up her game even more. I would argue with anyone that Britney is and has been in control of the game this season. While she had a shaky start and lost two players in one week, her pick of Shane solidified her seat in the house up until the “reset.” From that point on, Britney used her superb social skills to help create the strongest alliance in the house. Week after week her social and mental game has impressed me (not to mention her awesome commentary). This week, Britney is turning a terrible situation into a win-win one for herself. She hopped on Frank’s deal to join forces and vote out Dan, without letting anyone but her closest ally, Shane, in on it. She even was smart enough to talk with Frank in private, away from her partner, and solidify his trust in her. Britney’s in a great place because if the veto is used by anyone, she should be safe this week. The only possible way she could be nominated is if Shane wins veto and both he and Ian play it (in which case, Britney should still have the votes to stay in the house). In the past, the “great” players of the game have often made their alliances apparent and will go to their Big Brother deaths by staying true to their alliances, but Britney’s playing a much sneakier game. She’s in it to win it this season, and clearly is trying to play a much more strategic game than her last attempt. As we get nearer to the end, the players will begin thinking about who is a safe bet to bring with them in the final two. Shane and Frank have won too many competitions and therefore have huge targets on their backs. Dan is a famous mastermind of the game who is starting to lose his cool, so his days are numbered. Danielle has also faired pretty well in challenges this season and might be a tough competitor to beat. That easily leaves Britney and Ian in the best spots of the Quack Pack. I really can’t see how  she couldn’t end up in the final four.

But that’s the beauty of Big Brother. A simple competition could change everything. So I’ll be tuned in tonight, anxiously awaiting the results of Veto competition number two and crossing my fingers that Britney (and the rest of the Quack Pack, even Dan) stays another week.

I’ve been a Britney fan for years now, and as much as I loved me some Janelle, I’ve been routing for a Britney win all season. So here’s hoping she can keep her new fake “alliance” with Frank a secret, continue to play both sides of the house, and set herself up for a win.