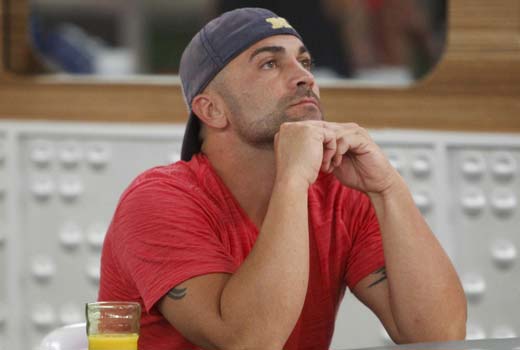 In The Big Brother House: Round 14 *Update*

UPDATE:
Since this article was published, Kara has been evicted and Willie expelled for violence (technically towards Joe, but that’s just because Joe happened to be standing in the way of Willie’s temper). Meanwhile, Frank survived eviction and won HOH. Boogie blew the Coach’s Competition with his ego so Janelle won and kept Ashley safe (I quite like Ashley and her Janelle-teammate Wil so I’ll take it). I’m psyched that Frank is in power because, while I don’t really like any of the coaches and don’t want to feed Boogie’s ego even more than I’m about to, I think Frank’s a great player. I’m also a big Jen fan and Ian is finding his footing but the jury’s mostly still out. Dan’s only got one player left so is laying low, but that’s the strategy that won him season 10 so he’s not dead yet…

Now, a word on Willie:
Many a player (particularly in Big Brother) has been taken down by a bad temper (remember Chima? Worst exit in history) and that’s exactly what happened to Willie. I don’t watch the live feeds but from what I saw on the broadcast episodes I gathered that Willie went down mostly because of that fight he had with Frank. He controlled the house in week one, then he fought with Frank, it alienated a few people, and because he felt like he was in danger Willie freaked out and shot himself in the foot. If we’ve learned anything from great players of the past (like Dan, for example, and even Frank last week) it’s that you’re never out until you’re out. Had Willie kept his temper under control when he felt like he was in danger he could have gotten himself out of danger since we saw last week that he has a decent head for strategy and social game.

Temper aside, he was set up for failure by two things: his coach, and the ruling coach. Once he was already in trouble, if he’d been on team Dan, Boogie or maybe even Janelle, his coach would have tried to save him, talk him down and work the house. But Britney is only in this because she’s funny; she’s a terrible player and that’s why she freaked out and abandoned him (basically ensuring she’d be at least one player down this week). She’s not good under pressure, and Willie was a little bit too hard to control (just for Britney, not in general). But Britney wouldn’t have had a chance to screw up if Boogie hadn’t pushed Willie into trouble in the first place. As much as it pains me to say, Boogie’s playing a strong game this year and is really in charge of the house (though I still think Janelle’s going far), as though he may have actually learned something from those years with Dr. Will. His best move so far was right after Willie’s fight with Frank. Essentially what happened was that Willie repeated something Wil said then someone repeated that to Frank, framing it as though he’d been mocking Wil’s sexuality rather than reporting to Britneythat Wil wasn’t having any of his gameplay. Frank then reported that to the house and Willie tried to set him straight and clear his name, but that temper of his got in the way. But Frank didn’t keep his cool either, he fought back just as hard and no one was Really in the wrong. What Boogie did then was jump on the situation and frame it to his liking. Using Willie’s family reputation and tough-guy demeanor against him, Boogie proclaimed him a “bully”, when that’s not actually what went down. But it was the perfect could-be-possible adjective to turn the house on Willy.  That one moment could be counted as a turning point for keeping Frank in and getting Willie out of the house in a matter of days. It was one sentence of work- I’d say that’s better game than winning the Coach’s Competition by third-place default. Britney is going down, and she’s going down fast. But compared to the game pedigree of the other coaches, Britney deserves to go down.

Big Brother is a show always desperate to re-invent itself. With a mandate of “expect the unexpected”, they’ve been heaping twists onto the houseguests for years; some great (the power of veto), some not so great (project DNA). In recent years, like many ageing shows, the producers have fallen in love with the idea of bringing back former contestants. It’s a good system- it carries viewers over from one season to another, creates a sense of legacy, takes the weight of introduction off the editors, guarantees what kind of player the producers are signing up, etc, etc. I like the trend because there are some reality stars who make great repeat appearances (Survivor was going to have Boston Rob back until he won; Project Runway All-Stars was essentially created to correct the Great Mondo Mistake of 2 years previous- both with awesome results) and I’m always happy to have my favourites back. But I’m very aware that the best seasons of all these shows have happened when they get back to basics and let the new players play, just like the soon-to-be-allstars got to. So I was torn upon learning that this season of Big Brother was bringing back 4 famous players to “coach” the new arrivals. I like that they’re not actually competing, but they certainly are going to impede the rise of any truly great, memorable players from this lot. So far it’s shaking out okay, but we’re only 2 episodes in.

The four chosen returnees are good choices. Will was off the table (because he has a life), so Boogie was a must because there is no all-stars without Chilltown. Janelle was good too. I’m not her biggest fan but she’s a good competition-based gameplayer and that’s a strong contrast to the other coaches (most of whom know that winning too much is an invitation to the jury house). Britney, while a hilarious personality who will surely be fun to watch, was far from a memorable strategic or competition player in her season, so completely doesn’t fit in with the other three (she most likely was the backup plan when Daniele Donato declined). Dan, however, was the biggest shoe-in of the lot. The second best player of all time (after Dr. Will), Dan’s season 10 game was impeccable and you just know a guy like that’ll be a sucker for getting to coach other players (remember when he taught Ollie how to swim?). Now, the problem has quickly and predictably become apparent, specifically with Dan as egged on by Boogie (Dan famously took strategy cues from Chilltown in his season). What made Dan such a great player was that he knew how and when to lay low. He came out of the gate too strong and ended up on the wrong end of the house early (just like Will in season 2), then staged the greatest comeback in show history. But here he’s coming from an arrogant place of strength and therefore has already made a bunch of dumb moves. He picked the prettiest girls for his team instead of picking based on skill or smarts (pretty girls have only done well when they’re immensely well liked, which is no guarantee after only a few hours in the house) so he promptly lost the first competition and is already one player down. He’s tipped his hand and shown the other players who he values most on his team (thereby immediately exposing her to the block) and he keeps strutting around the house as if he owns it, alienating the other teams. Unfortunately, he teamed up with Boogie straight away (presumably without counting and noting that together thy have 5 votes and Janelle and Britney who teamed up in response have 6). Boogie, while a BB legend, honestly believes himself to be a legend because he’s a good player. Now, I will grant you that Boogie has consistently come through on competitions in a pinch (ie: whenever Will told him to win, he would win) and that he’s managed his showmances well in the past. But there is literally no one in this whole world who thinks Boogie was the brains behind the Chilltown operation, except apparently Boogie himself. The strategy was all Will’s, Boogie was the muscle, the sidekick, the henchman. In teaming up with Dan, Boogie’s clearly identified the player most like Will in strategic ways (asking him if he wants to “Will it up” this summer) but I highly doubt, with their power dynamic, Dan will ever be able to take the strategic lead. Boogie’s made two good decisions so far (picking Frank and saving Ian, who was definitely going home) but Dan’s made none. That doesn’t bode well for my former favourite player.

On the flip side, Britney is doing incredibly well so far. I want to root for Ian (which is getting harder and harder to do), I like Frank (though if he can save himself from the epic target on his back, that’ll be impressive) and Jen seems like she has potential (actually, team Boogie is pretty good, long as he doesn’t screw them up with his ego), but I think Britney and Janelle’s teams really might take this season. Winning the first competition, Britney got to assign an HOH from her group. She picked Willie, which was smart because he was being outed as Russell Hantz’s brother and needed to be safe for the week in order to get his footing. He’s also proven a pretty good HOH so far and might be a pretty good player going forward. I also really like Wil so far, though I’m not really sure why. I think he looks like he can actually do things and maybe has a brain under all that hair. I don’t like Janelle much but she has a strong team who seems like they could go far (though Joe is incredibly annoying). Willie aside, I’m not sure about Britney’s team since the cute guy hasn’t said more than 2 words and Jojo seems like a crazy person, but if they do manage to get Frank out this week, the Britney/Janelle alliance has a real shot at toppling the guys who are bigger stars of the game and not afraid to say it.