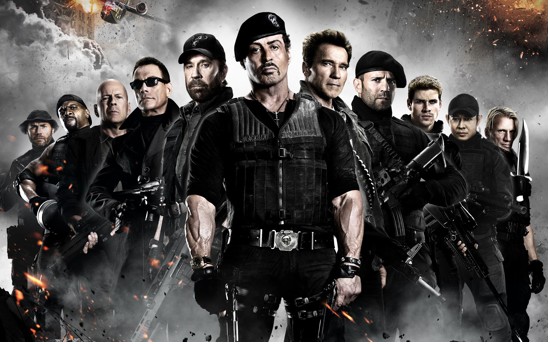 Delivering The Pain: The Expendables 2

I’m sure you didn’t walk into the first Expendables expecting anything too serious and I can truthfully declare that you shouldn’t expect anything deeper or more meaningful than that when checking out the star studded sequel. With the same all-star action film line up from the first film along with some killer new additions, The Expendables 2 is another bloody good bullet-riddled piece of popcorn fun that all fans of the action genre will thoroughly enjoy. From the very start of the film the explosions and graphic gunfights are non-stop, and for those who are looking for less talk and more action in their films this summer, this is definitely the movie for you.

It’s easy for fans to disregard any less-than-stellar acting and the lack of any significant plot because the film isn’t trying to deliver either in the first place. This movie is pure action junk food for the brain, nothing more and certainly nothing less. One thing I wasn’t too impressed with was the sense of revenge which was the driving point for our characters this time out. In the original film, our heroes were doing the right thing for the people, and while that theme eventually came back to center stage in the sequel, the whole idea of vengeance for a character we didn’t care much for in the first place made the film a little less engaging. But it still didn’t stop people from having a good time.

The first Expendables film centered mainly on Stallone and Statham’s characters, but this time out many other characters managed to get more screen time making it more than just a ‘Stallone’ flick. While I personally would have enjoyed seeing more Jet Li, others like Lundgren, Crews, and Couture all have more screentime to work with in addition to extended cameos by Willis and Swartzenegger. While Chuck Norris’ presence on the screen is also limited, it’s better that way since he steals the spotlight from those we should have been focusing on instead.

The role of the villain is played astonishingly well by Jean-Claude Van Damme, and Scott Adkins is great as Van Damme’s badass number two. When we are introduced to these two brutal villains, Van Damme basically belittles Bernie Ross (Stallone) and his crew while holding a hostage. This scene is done so well that by the time it’s finished, the audience is oozing with hatred for these two men and can’t wait to watch the heroes rip them apart. You love to hate them and it makes for a more satisfying finish when the final bloodbath begins. You’re dying to see Stallone and his crew dish out some major payback and they do not disappoint.

While the first Expendables was very violent, the sequel is more so, especially when it comes to blood and gore. This movie is close to Rambo 4 in terms of heads exploding and blood flying all over the place. There are a lot of scenes where you see body parts flying and any attempt to try to count how many people are killed is next to impossible. While this is a dream for any fan of the action films of the 80’s and 90’s, this is not something parents should consider taking their kids to. This film is extremely violent and I wouldn’t recommend taking anyone under the age of sixteen to see it.

Overall, The Expendables 2 is nothing more or less than what we were promised: a non-stop piece of hardcore action where any deficiency in plot or acting is made up for with intense action and humour. This nostalgic piece of cinema is an awesome reminder of what summer movies were in decades past. This is what made going to the movies on hot summer days so much fun, which is why many fans will walk out of the Expendables 2 with big grins on their faces wondering how long we’ll have to wait for the third film to hit theatres.