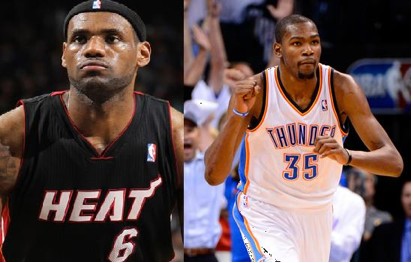 The Lesser Of Two Evils

I’m going to be honest from the very start, I did not watch very much of this year’s NBA finals. I could barely watch five minutes of it without feeling the urge to blow chunks. This season, ripe off a very bitter lockout, the finals came together with what I could clearly say was the worst possible combination to close out the season. While TV ratings might have been up, I couldn’t stand the sight of both teams and couldn’t have cared less which team walked away with the championship. Never in the history of the NBA have two hated teams reached the finals, leaving fans to pick between two evils when rooting for an eventual winner. The bad news was, someone had to win it.

On one side we had the Miami Heat; the team that everyone loves to hate, especially if you happen to reside in the state of Ohio. Last year most of the league celebrated when Dallas topped the Heat in the finals, and for good reason. Players like Chris Bosh and especially LeBron James conspired to move to Miami to stack the team with all-stars and become a dynasty of greed. All it did was make several fanbases angry and the rest of the fans (excluding Miami of course) now hate the Heat for trying to buy a title (not unlike other evil franchises, ie: The New York Yankees). The Heat is today, and probably for the next several years, the team that everyone will love to hate. Their winning the title this yeah will surely elevate that hatred, but there are many fans who were just as uncomfortable with the alternative.

Last year, Dallas was the team many fans were behind. Their victory over the NBA’s version of the Evil Empire was savoury on so many levels. This year the fans had to pick between the detestable Miami Heat or the Oklahoma City Thunder, a team that has its own dark history in the NBA. Don’t believe me, just ask the people of Seattle. Watching the Thunder storm their way to the finals had to be tough for anyone in the state of Washington. The city of Seattle was given the royal screwjob when they lost a team to a group of owners who claimed to want to keep the team on the west coast and then moved them to Oklahoma City the first chance they got.

This year’s finals of the NBA represented two things that are wrong with sports today, especially in professional basketball. The Heat represent the attitude that turns off a lot of fans, spending money to try to buy their way back to the finals. (The Miami Marlins have taken a page out of the Heat’s playbook and tried to buy some big name players to improve their chances; unfortunately for the Marlin’s that strategy didn’t work cause the Heat bought the biggest names on the market, where as the Marlins didn’t go big enough, failing to sign Albert Pujols and C.J. Wilson because of reports that the Marlins refused to give them no-trade clauses). No one likes to see a team that tries to stack up by hogging all the good free agents, creating a uneven playing ground. While parity will likely never exist in any professional capacity, when teams go above what is normal, that is when many fans get a bitter taste for the coming season and begin to hate the game they want to love and enjoy watching. It hurts the league when one gets out of hand, especially when that team wins. Fans get upset, assume future seasons are already lost and refuse to commit to tickets, merchandise, etc. This is why the salary cap is so popular amongst fans, it keeps the big teams in check and promotes at least a closer-to-even level for all teams to compete. This is why the Yankees and now the Heat are so loathed by the fans of their respective leagues. They are, in the fans’ eyes, not playing fair.

The Oklahoma City Thunder represent another bad trend that’s going on in professional sports, that being the lack of loyalty between owners and the city their team resides in. While I have no doubt owners deserve to have a city that supports their team, moving them should only happen in what is considered a worst case scenario. This was not the case for the Seattle Supersonics. The fanbase was there, the team was making money and it’s assumed by many that the new owners bolted only because the city and the state were unwilling to pump tax dollars into a new stadium for them. This kind of disloyalty is equally loathed by fans around the league, as Seattle, while not the best franchise, was nowhere near the lowest in terms of income. The owners didn’t care and childishly took their ball elsewhere and the Oklahoma Thunder was born.

While I understand nothing will change, what upsets people the most is the attempt by the media to hide the facts. Television commentators either suffer from severe memory loss or the networks and the NBA have been forcing them to pump bullshit onto the airwaves during the NBA finals. During the little commentary I did manage to see, it was said that the Thunder hadn’t been to the finals since 1996. This is completely untrue. The “Thunder” had never been to the finals at all, the Supersonics had in 1996. The NBA’s attempt to whitewash and rewrite history is an insult to the fans of Seattle who certainly remember the no-so-distant past.

This is the reason why I had little interest in watching this year’s finals. The two worst teams in terms of public relations and fan loyalty met in the finals this year and I couldn’t care less which one of them managed to win the championship. Both of these teams represent the worst the NBA has to offer… so much that the thought of this atrocious final made me wish they were still locked out.