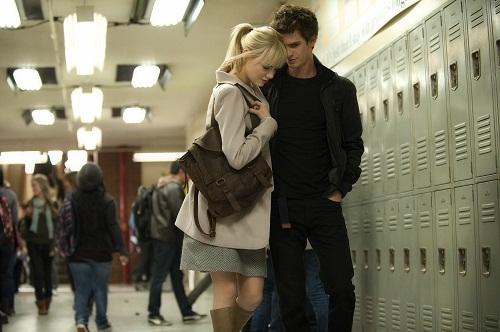 When I was a kid, my first superhero love was Spiderman. In his cartoon incarnation, he was a wise-cracking, semi-nerdy photographer who just seemed to stumble into crime fighting. He was good-hearted and goofy, and he earned his super powers by supplementing with scientific curiosity and goodwill. When Sam Raimi’s version of the character came out, I could appreciate the pop-candy aesthetic and attempt to bring out serious themes in the webcrawler’s travails, but it didn’t reflect that first superhero crush that I had watched on Saturday mornings. Tobey Maguire was never Peter Parker, let alone Spiderman. And Kirsten Dunst, despite being a totally capable actress in other arenas, never caused Mary Jane to transcend the typical “damsel in distress” love interest role.

So in all the ways that the early Spiderman films failed, the new Amazing Spiderman succeeds. Andrew Garfield is a perfect pick for Spiderman. Wirey and brainy, with a nervous intensity that leads to awkward stammering as often as it leads to witty banter, Garfield earns his superhero status with that same mixture of brains and heart that captured me at age 8. And his chemistry with Emma Stone is palpable, lending their love interest scenes a dash of the serious even as they maintain a deceptively light tone. Stone in general is a revolution in superhero love interests, in that Gwen Stacey (despite her improbably short skirts) is an actually intriguing character. Despite a few efforts to put her in danger, she never really needs saving, she doesn’t beg Spiderman not to fight crime, he doesn’t spend half the movie trying to hide his secret identity from her (in fact, he flat out tells her because he respects her), and she’s an interesting, witty, active female protagonist within Spiderman’s film.

Unfortunately, the rest of the movie isn’t as good as its leads. Remember when I told you about all the clichés the movie avoids in terms of Gwen Stacey? It also throws in a last minute romantic complication that doesn’t make much sense. The plot itself meanders around the main characters, taking too long to get to the web swinging and then over-focusing on way-too-familiar beats.

Anyone who’s seen a Spiderman film knows the basic idea: bitten by radioactive spider, Uncle Ben dies, “great power=great responsibility,” superheroics. The movie fails to do anything original with these beats. Despite some intriguing twists on the mythology as established in the other films (such as having Peter more actively search out the lab that contains the radioactive spider, and making the technology that causes Peter’s mutation a direct result of his father’s work), they fail to really revitalize the formula outside of their central two characters.

I’m excited for the next installment when the movie will be unburdened by the confines of an origin story and can hopefully really explore Gwen Stacey and Peter Parker. These stars are so good that I’d probably watch them remake the same movie, but I hope that the box office success of this reboot will help motivate the producers to give Andrew Garfield and Emma Stone a script equal to their talent.