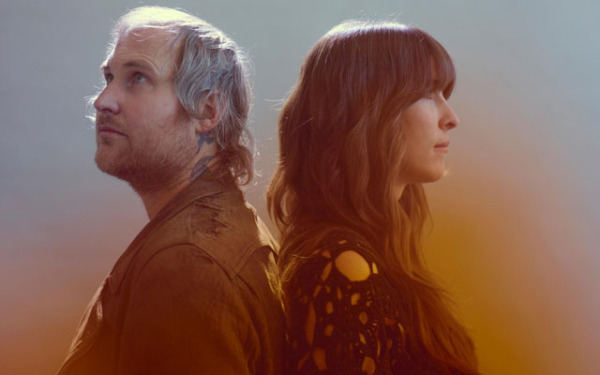 It could be safe to say that Lucifer is, in a broad stroke kind of manner, a lullaby album meant to keep Indra Dunis & Aaron Coyes’ newborn Mikko safe from the terrors of the night. Patient and understated, drum machines kiss simplistic guitar solos creating a melancholic haze of sound. Layers come and go with ease, repetition the album’s best friend. It’s tender and heartfelt – clearly a profession of adoration for the new life they’ve created. Also, with every song over six minutes except for the intro and outro, you can hear the time put in both literally and figuratively.

Coming off a “mushroom-induced tour-of-the-mind journey,” Coyes builds landscapes for Dunis to paint with her dream-pop vocals. Echoing whispers present “Beautiful Son” overtop of bubbly synth that gives way to a blues-based solo reminiscent of something out of Velvet Underground album. Dunis’ play on the idea of a son/sun doesn’t come off as a tired mechanism either. Radiant, her vocals reflect the glow she speaks of seeing from the eyes & smile of her son.

However, with an album named Lucifer, it’s tough to think that there isn’t an underlying dark presence throughout. The maturity of this decision shows with the progression from 936 (2011’s release). “Cosmic Tide” puts that new found level on full display with a deep, organ heavy reggae induced movement. The sound is expansive, growing and warping with each passing second. The continuous wave of sound crashing is coupled with the chants of “stand on the shore / work with the sea” beautifully. Vocals travel around and throughout space while negative noise fills the silence.

Those sounds bleed over into the following track, “Midnight,” picking up an ominous overcast. Mostly spoken, the phrase “words are words,” blends in and out of the dark production. At this point, with the track named what it is, you could imagine this concept album of night music to be at its blackest. The moon is at its highest, the midnight sky swallowing all with only a few stars adding accents here and there. “LO HI” continues this style of heaviness but has its shining stars within the croons and giggles/cries of Dunis and Mikko. Coyes paints the dichotomous sounds with ease, sculpting ethereal vocals with a dub beat.

Lucifer has some flaws in its secluded style but its success lies in the fact that it captures a family’s love so fully. I would like to hear what’s sung a bit clearer but Dunis is able to portray the feeling that’s associated to the lyrics with ease. It’s a perfect direction to take from their previous effort; expanding on lo-fi sound while maintaining a feeling of endearment.