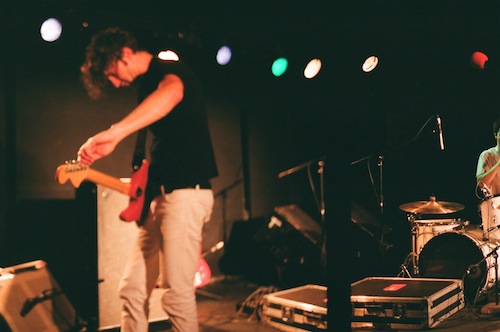 The seconds before an album starts up (well, in the CD days) tend to have this quiet-before-the-storm feel. As if, you’ve just saw lightning and you’re waiting for that sternum-rattling thunder to follow. Sometimes you get let down and nothing really happens, a little toot maybe. However, there are also the booming releases from the heavens; the kind that make you admire what’s transpired. That first track off an album usually can determine whether or not you’ll like what follows and when a band nails that opening track, it’s a beautiful moment. That list isn’t short, and it just grew with this release back in May. Japandroids come flying out of the gates with their second album and don’t let up one bit for a blistering 35 minutes.

“The Nights of Wine and Roses” – our aforementioned opener – is anthemic. It’s a call to arms to “yell like hell to the heavens” and to drink/smoke until what you believe in comes true. Brian King and David Prowse throw down as hard as they ever have, layering a cacophony of mangled floor toms, drone, and vocals. It immediately reminds you what these guys are capable of when they have time to record (they toured extensively after their 2009 Post-Nothing and barely released any new material between then and now). It’s dramatic, moving, and complete – exactly how the duo performs. An idea King portrays lyrically throughout, that life should be seized and conquered rather than watched.

The lines, ‘wildness is our treasure so boldly surrender to me and to the night,’ calls forth the rousing even more off the third track “Evil’s Sway.” The unrest and calamitous nature of Japandroid’s sound and tone really brings the story together on this. A man and woman, sexual red via candle light and a low laying sun, selling their gold for kindling to spark their fire. King’s never necessarily been a lyricist and for good reason because what makes these songs work is their confined-ness. Not everything needs to be an epic poem or a traverse through the minds of others. The ability to portray both musically and vocally an emotion, an experience, is all you need. Their sound is based off repetition of the right noises until it explodes. “Evil Sway” is one of the best examples of that.

Celebration Rock is one of the most aptly named albums in a long time. Not saying that the two are comparable but Thriller was the same way. The title sums up exactly what you’re about to listen to since, ya know, it’s freaking Thriller we’re talking about here. Japandroids deliver poignant feelings via rhythmic guitars and passionate drumming that holds a beat just long enough for Brian to belt out his rally cries. Blood-soaked & adrenaline fueled, Celebration Rock has a cannonball run kind of attitude, screaming a no-reason-to-look-back way of life.