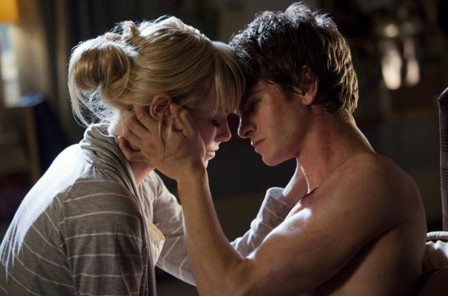 How has your summer movie season been going? Despite an early high, I’ve been in a bit of a movie slump of late, with a string of films that failed to connect with me. Last week’s Brave gave me some hope that it could be turning around, though, which leads us directly into the lovely month of July. We have 2 major superhero films, A Gossip Girl on the big screen, and at least one poorly named-but-hopefully-funny comedy.

Author’s Note: On last month’s preview, I failed to include Ted, the new motion-capture comedy starring Mark Whalberg and Seth McFarlane as a Teddy Bear. This was not due to lack of desire to see it (I’m actually pretty pumped!) but due to a changing release date.

The Amazing Spiderman – Many of my friends still can’t get over the fact that Sony is making a new Spiderman film so soon after the last series. I see their point; I just don’t share it. Although I think Sam Raimi did a fine job with 1 & 2 (and I laughed a few times in 3), his take on Spiderman never entirely jived with the one in my head. To me, Peter Parker was always a witty prankster of a superhero who hid his pain under puns, not the golden-era goofball played by Tobey Maguire. And despite really liking her in other roles, I never really bought into Kirsten Dunst’s Mary Jane. Which makes me double excited to watch Andrew Garfield’s much-more-my-style take on Peter Parker coupled with the can-basically-do-no-wrong Emma Stone’s Gwen Stacy (Gwen was also my favorite of Peter’s love interests on the animated cartoon). Here’s hoping The Amazing Spiderman lives up to both my expectations, and audience skepticism.

Savages– This movie looks surprisingly interesting, and frankly I’m rooting for Blake Lively. Despite her practically-comatose portrayal of Serena van der Woodsen, I miss the girl who once made losing your virginity to your hot soccer coach seem so depressing in The Sisterhood of the Traveling Pants.  This movie, directed by Oliver inconsistent-as-hell Stone, tells the story of two low-level drug dealers (in a seemingly harmonious three way relationship with Lively) who get caught up in Mexican cartel wars, and also features John Travolta, Uma Thurman, and Salma Hayek.

**This week also sees the widescreen release of Katy Perry: Part of Me, which is sure to make the similar Justin Bieber-themed “documentary” feel deep and inspiring in comparison.

Big dorky releases take a week off, and cede the pre-Dark Knight slate to Ice Age 3. Like Madagascar, I’ve somehow managed to avoid every other iteration of this franchise, but I bear it no ill will. The trailers are always engrossing, and I like that acorn-hungry squirrel. I’m a little bummed about the strange message about the Ice Age that this movie must be teaching to children, but hopefully their parents will explain the actual science behind it (because if I know anything about children, it’s that they LOVE getting science lectures in the middle of summer when all they wanted was to eat popcorn and drink massive amounts of soda).

And now we’re here. Summer’s defacto big kahuna, even if a certain other film probably already grabbed that box office crown. This week sees the release of The Dark Knight Rises. And here is where I admit something sort of shameful: I still haven’t watched the preview for it. I watched the teaser when it was on before some movie that I saw in theaters, but aside from that I have solidly avoided it. For that reason, I have no opinions on Bane’s voice, or Anne Hathaway’s take on catwoman, or any new bits of gear that Bat is sporting. All I have is my belief that this movie is going to blow me away and successfully conclude a trilogy that has redefined genre filmmaking.

The Watch comes out this weekend, which seems like a funny bit of alien comedy. Jonah Hill, Ben Stiller, Vince Vaughn and Richard Ayoade (who was really funny in the Netflix-able TV show The IT Crowd) star as four bumbling neighborhood watchmen who accidentally stumble upon a real alien invasion. Though the name is unfortunate due to the Trayvon Martin tragedy a few months ago, the ads have been working over time to shout out that this is an alien comedy, and not some oddly tone-deaf satire of over zealous vigilantes.

This week also sees the release of Step Up 3D, which lost my money during it’s trailers when it insisted on bringing a story into all the awesome visuals. Honestly, I’d watch a full movie of 3D badass dancing if I didn’t have to watch this much bad acting to get there.

And in limited release, we have the incredibly quirky Ruby Sparks. The story of a writer whose dream girl comes to life and starts doing everything that he writes her to do sounds like the kind of high-premise movie that normally lures me into the theater, and then annoys me the whole time. But it could also be an adorable bit of summertime counter-programming. Paul Dano, Zoe Kazan, Annette Bening, and Antonio Banderas star.

And that’s it for July! Here’s hoping for at least two amazings and one adorable out of this crop.