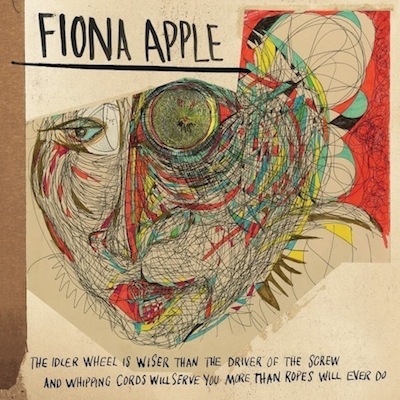 I like making it a point in being able to sum up something I’ve seen or heard in three words or less. If I’m lucky enough, I’ll be able to do it in a single idea; an all encompassing word that brings about not only a definition that fits but a connotation that couples, too. After spending a lot of time with this album on loop – like 5 days now – I believe I found a fitting word to use: visceral. The Idler Wheel Is Wiser Than The Driver Of The Screw And Whipping Cords Will Serve You More Than Ropes Will Ever Do may easily roll its way to the top of this year’s “Best Albums” list because of its ability at presenting such a bluntness in a digestible manner. There is a thesis and following Ms. Apple through her exploration and experimentation is delightful.

The somber opener, “Every Single Night,” introduces us into the simplest desires of a woman who bathed in light with an explosive debut album (1996’s Tidal) yet landed in shadows just as rapidly after a tragic experience at the Roseland Ballroom. “Every single night is a fight with my brain / I just want to feel everything” carries throughout the lyrical content of The Idler Wheel..., depicting us a speaker winded & teeming. This dissonance is what leads to a loose sound that plays right into the hands of FIona’s abilities. We witness her verbal broaching as much as we get to actually feel it. The snarling, booming power from her core. Demons or angels, whatever is fighting inside her shows prominently. For example, her vocals move from left to right slowly during the track “Daredevil” as she spirals into a fit until she regains her ‘middle’ to focus on her plea for another’s everything. Stabby piano keys are met with a war-proclaiming drum track that’s only rivaled by her ferocious, dog-like delivery. It’s haunting and sets up a dichotomy many layers deep between listener/singer & lyrics/music.

However, as readily as Fiona is to separate us and be the friend that constantly belittles and moans yet we adore them, she pulls us in simultaneously portraying true heartbreak and emotion. The feat is awe striking and numbing. Personal blends with professional in the best of ways with the track “Jonathan” – a song about her long time boyfriend Jonathan Ames. The whirlwind of angst and unfiltered emotion wraps around her, engulfing and confusing our siren. Continuing with her fighting herself and attempting to feel the world, she moans for love but reflects on the fact that she inherently desires solitude in “Left Alone.” There’s shell she’s purposefully built up that binds and holds what she wishes to release and feel. The schism is clear and materializes physically in moonlit piano ballad “Werewolf” right after. Instinct has taken over at this point and the music is just her reaction.

The epitome of this compulsory, chemical response to hits its peak with “Anything We Want,” the most transitional song on the album. It goes from desire and longing to actuality for a single, perfect moment. “We don’t worry anymore… After all, look around, it’s happening, it’s happening, it’s happening now,” offers up the idea that we’ve found that feeling of everything we wanted to severely from the beginning. Traversing all of the heartbreak, the outcast, and the pain has brought forth happiness – the last feeling we could want; that moment of euphoria so many yearn for.

The array of freeform energies and the nuances that make up The Idler Wheel… gives this album a power few have had for quite some time. The Idler Wheel... works because its true to life: erratic, maddening, fulfilling yet dark. It’s a record that pours out from its core, turning its cheek for no one. It’s a beautiful idea to listen to music and experience its range alongside the singer, to feel the same lump in your throat that you hear her sing with. Complicated but poignant, Fiona Apple delivers the most exciting dose of pain you may ever know.