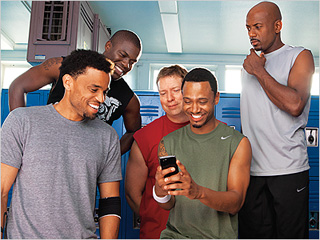 Think Like a Man is the ensemble comedy that Gary Marshall keeps trying to direct. It’s funny and clever with a cast of interconnected characters who are at least marginally believable (can we all please agree that Jessica Biel’s never again allowed to play the lonely, un-lovable girl? K, thanks) and the film enjoys that sort of meta self-referential slyness that so many attempt unsuccessfully.

Unlike He’s Just Not That Into You, a film which, like TLaM, was based on a self-help book, TLaM doesn’t fly directly in the face of said book’s fundamental principals. It doesn’t blindly accept them either. Instead, the screenwriters incorporate their source material’s existence into their story to allow the character to process, adhere to and reject its ideas as they will. There are women in the film who think Steve Harvey’s dating guide that teaches women how to “think like a man” is degrading and stupid, and there are women who live by its every suggestion. The men ignore the book, reject the book, call Harvey a traitor and then start using the book to improve their lives (in a sort of rebellion-meets-submission backwards kind of way).

The film’s biggest problem is its tendency to equate relationships with war. There are a lot of references to the men being “under attack”, which is stupid at best, insulting at worst and keeps honest simple interaction unhelpfully at bay. However, the elimination of the film’s second biggest problem actually eradicates the first- since said unenlightened metaphor comes almost entirely in narration. Kevin Hart and his narrating imbecile of a character (Cedric) are the worst things to happen to a movie since James Cameron decided to write his own scripts. As my mother would say, “he’s not funny, he’s not cute, he’s just rude”. The problem isn’t so much that last one (because, let’s face it, if all movie characters were nice and polite, there would never be much plot), it’s that Hart just isn’t funny and he certainly isn’t cute. No, that’s not a dig at the comedian’s height, it’s a dig at his massively unappealing Everything. Every single other man in the film is charming and endearing in some way (even frumpy married sidekick Bennett, even TURTLE!). But Cedric (Hart), he just whines and mooches and generally adorns the soundtrack with the most high-pitched ridiculous misplaced anger doofiness I’ve ever heard. He’s ridiculous and his elimination would raise the film from a solid B- to a B+ easy.

A few of the women are a little nuts too, but tolerable crazy, not Cedric all- I-need-is-Wendy-Williams-to-make-me-sane crazy. Meagan Good’s “90 Day Girl” (aka outrageously hot person #1) takes Harvey’s suggested 90 Day Rule (a sensible, useful tip) to insane extremes (he came up to your door, waiting for you and walked you to the car and you’re going to dump him because he didn’t open the door? Learn some priorities, woman!) and Taraji P Henson’s “Woman Who Is Her Own Man” dumps literally the perfect man because he doesn’t drive a Benz (basically). Otherwise, sensible single mom Candace (Regina Hall) and completely reasonable 8-year girlfriend Kristen (Gabrielle Union- aka outrageously hot person #2) are sensible, complete reasonable and generally helpful in their sanity and basic likability.

The non-Cedric men, on the other hand, are the key characters, and they are significantly better written than their female counterparts, on the whole. Romany Malco’s “Player”(aka outrageously hot person #3) is so smooth that he actually sells the usually ridiculous character of “the player”. In order to play someone, you have to first hook them, and Malco is pretty hard to resist. “The Mama’s Boy” (Terrence Jenkins- aka outrageously hot person #4) is so idyllically lovely that his mother-related antics really do inspired internal debate rather than a definitive dump verdict. Even Turtle’s looking good lately. TURTLE! Do you have any idea how ridiculous that sentence looks to me now that I’ve typed it? Freaking Turtle (real name: Jerry Farrara) plays long-term boyfriend to freaking Gabrielle Union- how on earth did he swing that? But here, Turtle isn’t Turtle. He’s sweet and sort of dorky and a little bit lazy and his biggest fault is that he’s essentially a big kid not in a rush to grow up. Also, he literally looks nothing like Turtle anymore. The last outrageously hot person (king of the generally outrageously hot cast, actually) is Michael Ealy as aspiring chef-meets-perfect boyfriend-meets sexiest man alive Dominic. This is the man freaking Henson breaks up with for No Reason At All. I’d never heard of Ealy before but now I’m a little bit in love with him.

Dominic aside, what makes the non-Cedric male characters in TLaM great is that they’re all good guys but do have substantial flaws (again, not Dominic, he’s perfect). They’re slightly skeezy, a little bit manipulative, unable to grow up or completely commitment-phobic, but they’re not caricatures of those adjectives. They’re kind of great in a real-guy way, which throws an interesting curveball at the film’s central premise. Harvey’s book suggests that there is a singular way men think and it’s like a key to be used to the advantage of women. If the film would drop its central romance-as-competition motif, it would realize that if the men within its frames are too complicated for an all-encompassing thought process, the non-fictional ones surely are too.