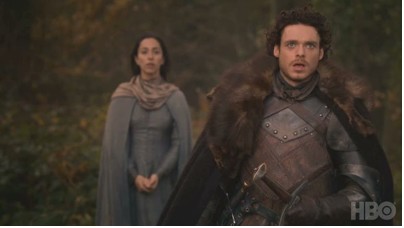 The Prince of Winterfell

Last night’s Game of Thrones focused a lot on a character who I think gets thoroughly shafted in the books*: Robb Stark. Since he’s not a point of view character, we rarely really invest in Ned’s heir, even as he’s heralded as the great hope of the North and the only real option for the Iron Throne once Renly’s killed. The tv series decision to feature him much more prominently makes sense both dramatically (since it’s kind of unsatisfying when one of your main characters disappears for basically a whole damn book) and emotionally. Robb is quickly turning into the emotional lynchpin of the series, which will only increase now that he’s caught between true love and duty, and is about to find out that his brothers were “killed” in Winterfell.

Tonight, we saw Robb’s reaction to two major betrayals in his life. His mother sacrificed her loyalty to Robb in order to free Jamie Lannister. His almost brother and de facto best friend, Theon, invaded his home, held his brothers captive, and besmirched the Stark name. Plus, the tide of war is changing, and Robb’s starting to doubt the whole Endeavour. Robb’s feeling a little untethered. Until, of course, the improbably gorgeous Talisa comes in, and the two are able to unburdened themselves both emotionally and physically. It’s a surprisingly romantic scene (most sex scenes on Game of Thrones are way more about intrigue, domination, or just keeping the audience from getting bored), and it makes a lot more sense than it did in the books.

Also playing a high-stakes game of romance roulette is Jon Snow, now captured by Wildings and saved from death by Ygritte. There will be much more to come out of all these developments (including the reappearance of Qorin Halfhand) to come, but for now I am enjoying the continued banter between the fiery red head and the mopey bastard.

Even more romance was had by Tyrion. In one of her most unlikeable scenes in a while, Cersei kidnaps and beats the shit out of the woman she thinks is her brother’s whore. The best part about the scene where Tyrion realizes this (and probably the reason why Peter Dinklage deserves another Emmy) is the way that we watch both relief and horror dawn on Tyrion’s face. He’s relieved that the woman he has fallen in love with isn’t in danger, but also profoundly disturbed at the horrors being enacted on this woman in Shae’s stead. The show has done a great job with building up Shae as a real character, and it makes the final scene between Tyrion and Shae dotted with ominous buildup and truly sweet.

Danaerys storyline was a stalling tactic this episode, with her basically cowering in darkness and raging at poor Jorah Mormount. The romantic feelings that Jorah has towards Dany are a major theme in the book, but I don’t entirely buy their relationship, which slightly hurts scenes like tonight’s, where Jorah is loyal and in love and Danaerys is young and angry. Still, I’m excited to see what goes down when Dany gets her dragon-tracking on in the House of the Undying.

Stannis and Davos had their own little bromance moment, which served two purposes. One, it redeemed Stannis slightly, because Davos is a bad ass and Stannis’s love for him is one of the cooler things about Stannis. And two, it reminded us what a threat Stannis is, and how much he really has going for him outside of just troop numbers, right before the climactic battle sure to occur before the season finale (although I have read the books, this presumption is based more on the fact that everyone keeps talking about how Stannis is approaching King’s Landing than on my own cheating).

But enough romance, what of the violence? Well, most of this episode was more on the romantic side, but we did get Jaq’en Haggar freeing Arya, Gendry, and Hot Pie from Harrenhall by murdering a whole bunch of people (after Arya cleverly tricked him). I’m bummed that their escape from Harrenhall means no more Tywin and Arya scenes, and even more bummed that we may not see Haggar again, but it was a pretty badass way out for both characters.

Theon rages around Winterfell, and his sister refuses to give him troops because she is not an idiot. “Killing” the Stark children was a huge tactical mistake, the kind born of petulance rather than logic. Yara quickly berates Theon for this, and in a great shift for her character, implores her baby brother to go back to the Iron Islands. One of the most compelling parts of Theon’s whole storyline is just how screwed he has been since he was first sent off to Winterfell as a child. Here, Yara seems to take legitimate pity on him (right after he stepped over the evil line by killing those two orphans, no less), and it serves to even further diminish Theon. He has truly fallen down a deep well of stupid.

The biggest reveals of the episode resolved two cliff hangers that felt much more epic in the book: the fates of the Stark boys and Jaime Lannister. Bran and Rickon are revealed quickly to be hiding out under ground near Winterfell. In the book, this fake out felt so intense that I almost stopped reading in anger. In the show, it was pretty obvious those charred corpses were not who Theon said they were. Jaime may have left some of you in more suspense – it was pretty obvious last week that Catelyn was feeling emotional and that Jaime was being an ass. But far from maiming or killing the Kingslayer, Catelyn set him free with Brienne as his guide/captor. The odd couple comedy that results from this is only beginning to play dividends on the show.

If this episode felt quieter than the usual Game of Thrones outing, it was. But as Tyrion and Varys’s veiled, genius conversation reminds us, shit is about to get real and I can pretty much assure you next week’s outing will be anything but quiet.