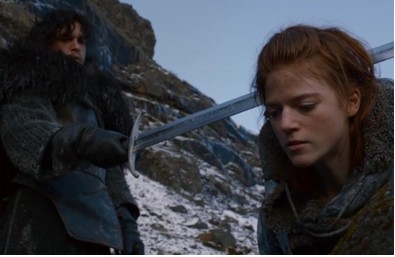 “The Old Gods and the New”

This episode was almost entirely invented. It all works, obviously, within the confines of the book, but I found the fact that most of it was made up for the TV show distracting throughout. Which is absurd, since all of Game of Thrones was made up (that’s what fiction is, Nisenkier), but there you go.

Maybe that’s why I had such a hard time investing in this week’s installment, but it also featured some really boring moments. Theon taking over Winterfell should have felt epic (and indeed, it was such a huge betrayal of the Starks and of the man Theon briefly wanted to be), but instead I felt bored. There was a pleasant absurdity to the scene where Theon conquers the great bastion of Stark goodness in the North by simply walking into Brann’s bedroom and telling him it’s conquered. Yet somehow, the moment didn’t entirely stick for me. And the whole seduction scene with Osha was a no-go from the start, and just felt like an excuse to get her naked, even if it did orchestrate Brann, Rickon, Hodor and Osha’s escape from occupied Winterfell.

As for the other Stark boys, there biggest threat in this episode may just be seventeen year old boy hormones. Robb chats up the gorgeous nurse that previously chastised him on the battle field, only to be reminded by his mother that he is promised to someone else. Jon Snow, despite his vow of celibacy, finds himself spending the night with an angry red head who delights in making Snow feel uncomfortable at the feel of her body. It led to my favorite moment of the night: Jon’s “angry cuddling” face, which was as close to adorable romantic comedy as this show gets.

Danaerys’s storyline was particularly hefty, leaving her without dragons and one pissed off Targaryen. But it felt meandering, with her talking to Xaro about how much she deserves power and rebuffing his marriage proposals for most of the episode, and the ending theft of her dragons lacked the punch it should have elicited.

Most of the cool action was reserved for King’s Landing, where Joffrey’s kingly temper tantrums lead to his whole posse getting set upon by the common man. One of the great strengths of the novels is in their ability to visualize the effect that all this kingly drama has on the little people. Around the opulence of the iron throne are thousands of people starving slowly. Here, that bubbles up in terrifying violence that almost sees Sansa murdered. It also gives us a great opportunity to see how smart and terrified Tyrion is by everything going on around him. Sometimes, the show plays Peter Dinklage’s spot-on portrayal as so cooly cunning that you forget that at heart, Tyrion is a guy trying to do the right thing. Here, you see just how deeply he feels for the people around him, and just how little he thinks of Joffrey (plus, bonus slaps!).

Arya, meanwhile, is forced into using her second kill because of her Stark curiousity. I love the relationship between Arya and Tywin, even if it is entirely “made up” for the TV show, and I loved the little dance of recognition that Arya played with Littlefinger tonight. The scenes at Harrenhall need to be a bit more harrowing and damaging to Arya, but I enjoy the moments of levity where Tywin sees the depth and cunning behind Arya’s subservience.

A meh episode of Game of Thrones is still thrilling, funny, and plot-moving-forward-y, but I look forward to the return of Brienne, Jamie, Davos, and (even?) Melisandre in the weeks to come.