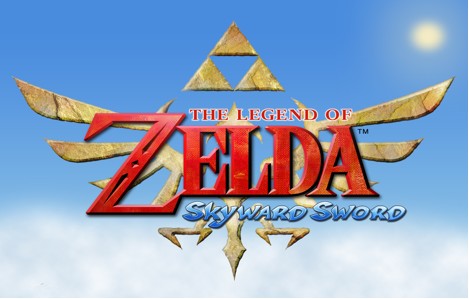 The Legend of Zelda: Skyward Sword

After much bitter complaining that there would never be a Zelda game as good as Ocarina of Time, I gave in to the colorful failing that is The Legend of Zelda: Skyward Sword. I was lucky enough to have a housemate who purchased the game on pre-order, so I got to use the fancy golden Wii remote and everything. As I’ve said many times, I’m picky and critical, so I hadn’t found much use for the Wii other than playing tennis or plugging in a Gamecube controller. This was my first experience playing a real game with the Wii motion controls. For your sake, I will get this out of the way now:

“Why Link? I clearly made a stabbing motion! Why did you pull out a bomb, explode yourself, and then jump of a cliff? I hate you!” I have now found that there is little in the world more rage-worthy than a game where you are fighting the controls instead of the boss. A friend hinted that since there is a simple accelerometer in the Wii remote, that small quick movements would get the best results. This lead to every type of flailing I could think of – sometimes you hit a stride and one specific movement got you the death-dealing forward stab you needed to poke the monster’s eye out. Oh but woe on you if thought that motion would still work in the next encounter, instead you got a spinning slice that dealt no damage to the skeleton with four swords to block your attacks. Your reward for thinking a stab motion would get you a stab attack? Paralyzing electricity, yay! The yay is necessary, without it you’ll throw the Wii remote into the TV and owe your friend a new one.

Now, I’m not saying that I expect the game to be easy, or that I blame the game for my failure. I enjoy games that end in my fiery death again and again – that seems to be the main goal of Super Meat Boy, it even displays your incompetence in a collage of your splashy death. I love that game. The reason this is different, is the dissatisfaction that comes with doing the same thing over and over waiting for the results to change. I know that sounds like video games, but it’s not. You do the same thing repeatedly, hoping you will press the right button with better timing. The fault is yours. You didn’t press the block button, so you died. Using the imprecise motion controls is like being punished for singing off-key when you don’t know the song and you’re wearing earplugs. “Press the A button to block” is pretty clear. There isn’t much nuance to button pressing. Timing, yes – technique of pressing, not so much. The rage comes from the feeling that you’ve done everything right, but you still lost because … eh.

Ok, the game itself. I really liked Skyward Sword. I thought the art style was beautiful, though I’m a sucker for colorful games. This seems like a nice compromise between the fancy realism of Twilight Princess and the lighthearted cartoonishness of Windwaker. Good thing they keep changing the art style though, because not much else changes. It’s a small gripe, because I love Zelda games, but I joked with the friend/purchaser of the game about finding three of something, which leads to a big cut-scene, after which you have to get 5 -7 of something. And that’s that happens: you visit the forest, volcano, and desert along with your trusted friends the slingshot, the hookshot/clawshot, bombs, and bow. That’s as specific as I can be to avoid spoilers, and it’s not a big surprise.

However, there are a ton of little things to make the game really enjoyable, and the old standby structure is done really well. The dungeons are interesting and beautiful, and the obstacles are creative. The game seems focused on growth and evolution, since you return to the same areas to explore different sections and watch them change. The desert presents different dangers based on time shifts; the forest expands once you learn to swim – the entire thing floods. Everything is about evolution – Groose and his theme music become more complex during the game, your sword evolves, you have spiritual growth, and Zelda … well she changes too. You’ll see. I was avoiding this version because I thought it wouldn’t hold up to the older  Zelda games, and I was dead wrong. Yes, the controls make me want to fling myself off of Skyloft, but the game is totally worth it.