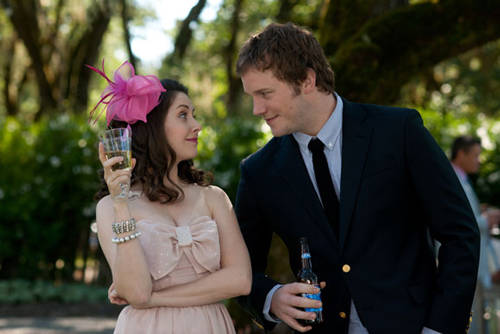 I was really looking forward to The 5 Year Engagement. I was convinced it would be the movie that would finally make me love Emily Blunt (I’ve never warmed to her, but remain convinced that John Krasinski would never marry a cold fish). And she fares pretty well. She’s just goofy enough to shed that cold thing (besides, the sublime Alison Brie takes that over for her to great comic effect) and she plays the conflict well enough to remind everyone that she’s a Golden Globe winner who’s not typically in romantic comedies.  She (and Mindy Kaling, obviously, who is the best of all the humans) are the highpoints of the film (oh, and Alison Brie, and Chris Pratt-whom I will literally never stop loving – it’s been since Everwood Season One already- they’re funny and wonderful but not funny and wonderful to the degree I was expecting from the best of Community and Parks & Rec). The lowpoint, for me at least, (and it really does pain me to say this) is Jason Segel. I know, I know- he’s so adorably sincere! How can you not love Jason Segel? – I do love Jason Segel, or I used to, or I want to? I don’t know. I just more and more am finding him annoying. What played as grown-man romanticism and open-heartedness in early How I Met Your Mother (and the teenage version of the same thing in Freaks & Geeks) is beginning to feel not unlike that SNL sketch where Jonah Hill plays a 6-year-old at the grownup table. I will concede that I’m not exactly of the right temperament to love the Segel (that’s Rachael, who literally shares a laugh-for-laugh sense of humour with the guy), but I just feel like Segel needs to grow a lot more than he has (especially for someone who’s been famously restless in his sitcom day job).

In this particular typical-Segel film, he’s excitable and sweet then moody and schlumpy (taking quirk past the point of acceptability) then heartbroken and douchey, then covered in potato salad, then happily-ever-after-y. Yawn. There’s nothing at all notable about The 5 Year Engagement apart from Alison Brie’s accent, Chris Pratt singing ex-girlfriend names to the tune of “We Didn’t Start the Fire” (both spoiled in the trailer) and the mesmerizing fact that Rhys Ifans seems to be in Literally Everything (he’s interesting here, stretching his smarmy-academic muscles). The best scenes all belong to Emily Blunt’s fellow psych-department eccentrics (led by but not including Ifans). A rag-tag crew of highly competitive academic oddballs, the Psych Department at The University of Michigan almost saved the movie for me- from their insane experiment suggestions to their insistence that Ratatouille is the ultimate gourmet commentary to the sub-sub-subplot conflict between Ming and My Best Friend! (Mindy Kaling, but she’s so spectacularly awesome and her book peered so thoroughly into my soul that she shall heretofore be referred to as “My Best Friend!”, with the exclamation point).

That’s really all I’ve got to say about The 5 Year Engagement, it was that boring. Jason Segel- grow up; Emily Blunt- better, but still no; Alison and Chris- I will always love you; LONG LIVE MINDY! That is all.