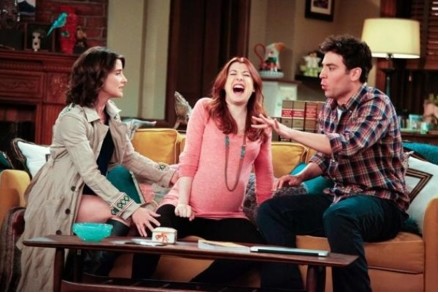 Season Wrap Up: How I Met Your Mother

I get what you were going for, How I Met Your Mother. It’s actually kind of clever. Have Barney flat out tell the audience that he is all about the misdirection, then have the show itself pull a major misdirection in regards to Barney’s love life. Only problem is, no one’s misdirected. In magician terms, it’s as though you tried to get the whole audience to stare at the dancing girl, but they kept watching as you grabbed the bunny out of the hat.

HIMYM has struggled somewhat in its seventh season. Despite a late-in-the-game burst of energy from Josh Radnor in his performance as Ted, and the lovely handling of two huge emotional arcs (Robin’s infertility, Ted’s declaration of love), a lot of this season has felt like stalling. We knew HIMYM had at least one more season, and so a lot of the development felt like forced obstacles to our characters reaching their endings.

I’m not one to complain about the fact that, seven seasons in, we still haven’t met the mother. I feel like if you’re watching the show just to witness the titular mother then you’re not really understanding the show. Since the very first episode, it’s been about the journey our characters take in order to end up as their adult selves. It’s about Robin learning to commit, Barney learning to trust, Ted learning to stop trying to make his life like his fantasy, and Lily and Marshall turning into loving, caring parents. The problem this season, however, is that the characters have started to feel stalled in their development. Ted faced this the most explicitly, with an interesting take on his whole love lorn shtick that had Robin telling him that he has failed to find the one because he isn’t really trying. It’s an interesting look at Ted, but it doesn’t REALLY mesh with the guy we knew in Season One and Two, and it feels more like a justification for the story’s meandering than it is for Ted’s meandering.

Robin and Barney are the two characters who have grown the most throughout the show, and I’d argue the show has been most successful in setting them up. But by Season Seven, and with all the weight of their every interaction behind them, did anyone REALLY think Barney was marrying anyone other Robin? I’m still pumped as hell to watch them get to that point, but it sort of invalidated an entire season’s worth of pretense.

To continue the misdirection theme that the minds behind HIMYM really liked (and I’ll admit has occasionally been employed by them to great avail), the season finale of season seven sort of confirmed that all of season seven was just misdirection. They were getting us to focus on things like Ted’s love for Robin and Barney’s love for Quinn, while trying to set the pieces for the love story that will dominate the time left until we finally meet the mother. Which is all well and good, but at this point in HIMYM’s run, I want my characters to stop with all the misdirection and start moving towards the actual magic.