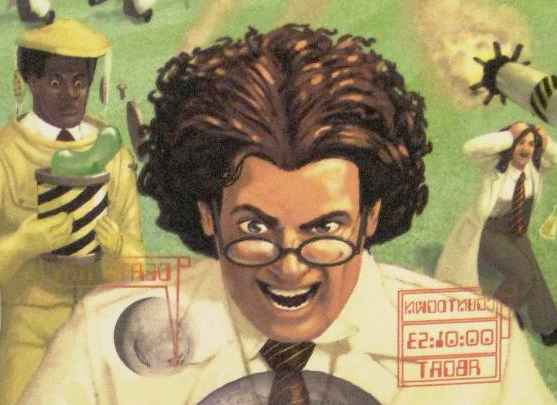 There are few games where one can be applauded for creative use of cannibalism.  This is probably a good thing for society as a whole.  For the rest of us though, it’s a far better thing that we have games like MSU.

The idea behind this clever card game is that each round there is a judge, much like in Apples to Apples or Cards Against Humanity, who offers the other players around the table a task.  This task tends to follow a somewhat four-colour premise like “Find Atlantis,”  “Make a Billion Dollars,” or “Take Over the Moon.”  The other players draw from the deck of Unstable Elements various items like Ninjas, Mud, Rap Music, and Bureaucracy and then have to find some creative way to accomplish this task, jotting their notes down hastily like the sociopathic outline of an essay or a deviant’s grant proposal.  The judge or “TA” then goes through these proposals, chooses which one is best by arbitrary, subjective evaluations which can be influenced by bribery and bad taste and then gives the the victor a point and passes the role of judge to the next player and the cycle continues.

Like Apples to Apples, the game works best when one has a good idea what will tickle the TA’s fancy.  Do they like well thought out, plausible scenarios?  Can they be convinced based on a series of improbable puns?  Do they have a soft spot for cannibalism?  Unlike Apples to Apples, the game requires that one do more than just pick a likely option and toss it out; the job of having to write down a clever response truly ups the learning curve, adding a Balderdash-esque need for clever penmanship and quirky writing skills.

It has its slow points as folks silently pen their devious scenarios, scratch out their failures, and agonize over just what the best usage of  Monkeys might be but this tension is broken nicely as the TA reads aloud the ridiculous suggestions that have made until finally choosing a winner.  I highly recommend this game for folks who don’t mind scribbling and who want to create instant camaraderie around a table.  I brought a group of strangers together who will now all giggle profusely at the mention of Robot Butlers for reasons that are best not gotten into in mixed company.  All in all, a solid game.  I can’t praise it enough.