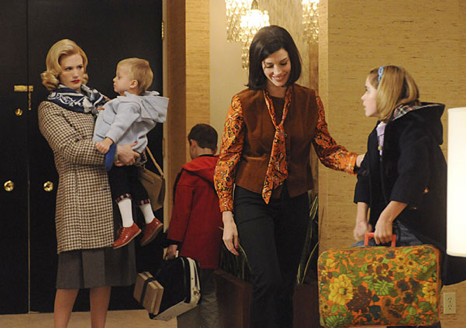 This week’s episode of Mad Men (both amusingly and aptly named “Dark Shadows”) was concerned with hunger. Don’s lack of hunger at work, a byproduct of the complacency of happiness, causes him to fall behind the other pieces of his creative team. So he attempts to turbo charge it, working on an idea for the first time in a long time and even engaging in some Pete Campbell-esque shady antics to try and get the clients to bite. He is continually contrasted with the eternally hungry Michael Ginsberg. There episode ending confrontation, in which Ginsberg realizes just how far he really is from Don’s position, is Mad Men at its terse, amoral best.

Another person frustrated by their lack of hunger is Megan. Unlike her other actress pals, Megan can afford to loaf around between gigs, getting into angry confrontations with the eternally hungry for everything Sally Draper. Here, Sally’s hunger for affection and connection is manipulated by Betty, and turned into a weapon against Megan and Don’s happiness.

That idea of happiness still confounds Betty. It’s here that Mad Men gets almost insultingly literal. I’m on record as hating fat Betty. I find the fat make up distracting, and overall it’s just not a particularly interesting way of representing Betty’s particular brand of happiness induced complacency. I much prefer the late-episode spiteful Betty, manipulating her own child to try and make herself feel better about her life. For years we’ve wondered if there’s something deeper inside Betty Draper. In “Dark Shadows,” we find out exactly what happiness means to Betty when she claims she’s thankful that “I have everything I want and no one has anything better.” In the middle of the episode, we see a sweet scene between Betty and Henry Francis that made me think for one moment that Fat Betty was just the price to be paid for Happy Betty. But as her petty antics prove, Betty is still far away from happiness, and so her hunger continues.

Pete Campbell managed to overtake Roger professionally by being hungrier than him. Now that he’s reached that point, his hunger stretches out aimlessly, globbing onto the idea of Alexis Bledel’s bored housewife with a starving man’s fervency. But watching Pete overtake him has reawakened Roger’s hunger, always striving just below the surface. The show has done a great job of showing the way that these men’s wandering eyes are mainly a result of their constant hunger for something to fulfill them. No one embodies this more than Roger, who has gone through two wives and one serious mistress all trying to fulfill the need he can’t explain. And here, he succeeds professionally only to let that omnipresent yearning tear down Jane just as she’s starting to get herself back up.

The greatest thing about Roger’s storyline is how far it shows the character has come. His obvious remorse upon leaving Jane in her now-ruined apartment is heartbreaking. In fact, this episode was a great episode all around for character growth, whether it was Megan and Don talking out their problem and reaching a consensus, Sally stretching her newly manipulative and terrifying anger muscles, or Peggy standing up to Roger. It wasn’t my favorite episode of the season by far, but it set up an interesting emotional space for the rest of the season to play out in.