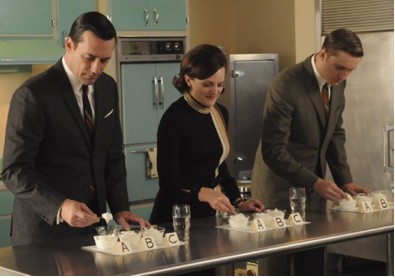 I picked a hell of a week to be too busy to write. Last week’s episode was one of my all time favorites, a roller coaster ride of surprising highs for our cast and a thoughtful, bittersweet ending that challenged the rest of the episode considerably. And I didn’t get to write about it.

This week took last week’s conclusion and fast tracked it. I’m use to discontent playing out quietly in the background for three seasons before anyone does anything about it. For that matter, so is Don Draper. But Meghan is not of the mindset. She’s part of a new generation of people who believe they deserve everything they want (unlike Don, who in my favorite line of the night explains “I was raised in the 30s. Our dream was indoor plumbing.”). So when she realizes that she feels stilted in her current job and that she still yearns to be an actress, she tells Don and quits her job to focus full time on acting.

Don is surprisingly cool about it, too. In fact, we may have seen some actual growth in Draper, as when he explains to Roger that he doesn’t just want Betty 2.0. Joan and Stan may be cynical about Meghan (and about Meghan and Don), but Don is really trying to be supportive and a different man than he was for his first marriage.

Peggy, similarly, has shown tremendous growth throughout this series. One of my favorite moments last week was watching Peggy’s legitimate joy for Meghan’s success. This week, she stood up for Don, for Meghan, and for herself. And when she tries to see the best in Meghan’s leaving (and in Meghan in general), I believe her. And when Don attacks her because he can’t attack Meghan, it’s tremendous to think of the huge jumps that had to occur in their relationship in order to get them to the point where Peggy can silence Don with “You know what, you’re not mad at me, so SHUT UP.”

Showing way less growth is Pete Campbell. Since the first episode of Mad Men, Pete has been a boy trying desperately to convince everyone around him that he’s a man. He’s a manipulator and a striver, and occasionally his desperate yearning has given way to moments of true emotion. But most of the time, he’s trying to paint in the life he thinks he should have.

Early in the episode, Roger calls Pete in to talk to him about a set of skis. Pete struggles to understand the situation, to understand Roger’s role in it, and his relief when he thinks he has figured it out is profound. Similarly, Pete falls into an intense situation with a deeply unhappy woman (played by RORY GILMORE), and is too much of a child to see her use of him for what it is. For a man so adept at manipulating other people, he fails to see the way he is perceived by the people around him. The moments when he is a tool to Roger’s ambition, or to relieve Beth’s hopelessness.

A lot changed this episode, but Mad Men is more about the effects of change than the changes themselves, so there’ll be more to talk about as we watch the ripples of Meghan’s departure and Pete’s new obsession. Not to get too on the nose, but this episode set up the broken, teetering edge of an elevator shaft. We still have to wait to see who’s going to fall down it.