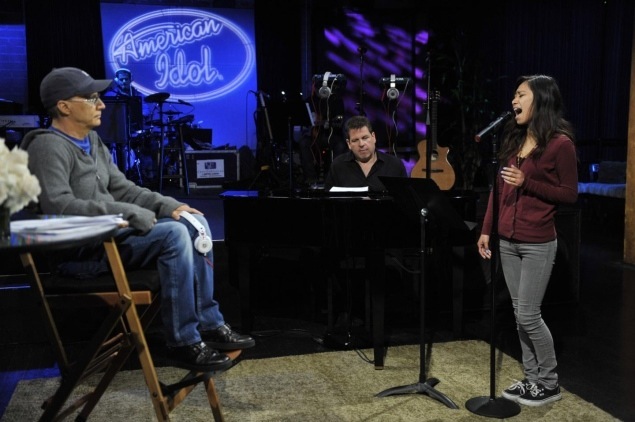 Let me just put it out there – I love American Idol. I love watching the kids come in, hearts on sleeves, nervous, hoping against hope they will get their “golden ticket to Hollywood”. I love watching their families and friends so anxious to see them do well. I don’t, however, enjoy the delusional truly dreadful people spewing obscenities when they are told they don’t have what it takes… but I digress. I love Ryan ad-libbing in the audition and Hollywood week episodes. I love watching what Jennifer Lopez wears and hearing what Steven Tyler says. I love watching the interactions between the contestants and guessing what they are like as people. I really love watching and hearing talented contestants learn and grow and develop. And I love watching Jimmy Iovine mentor them, especially when he brings in his friends to help, so when I had the opportunity to participate in a conference call with Jimmy, I leapt at the chance. Here is what I learned:

First of all, Jimmy seems like a really nice guy. He listened carefully to the questions asked and answered thoughtfully. He talked about his role, the contestants, the judges and the show.

On his role: he sees the contestants on Fridays, and the sessions usually last ½ an hour, although if someone needs more time they can come back after everyone has had a turn. He strives to treat every one of the singers equally. He said, “I’m in the creative process. I’m on their (the contestants’) side… I give a lot of thought before I go in…” to the mentoring sessions, which he described as similar to what he ordinarily does in his office, but “squished into a shorter time”.

On the contestants: He was impressed by the talents of this year’s contestants and emphasized how receptive they were to advice, “every one of these kids wants to learn and do better, especially the top 5”. He thought early on that Joshua, Jessica and Phillip would be in the top 3 but had no idea of which of them would be in the top 2. Jessica was “born with one of those gifts you see rarely – her range, her poise – those voices don’t come around every day…she’s a pro, when she grows in the next 2 years, she will be trouble, meaning really really good…she has all the pieces and I’m excited to work with her”. Jimmy felt song choice would be key for Jessica to get people to vote for her, but he liked the songs she would be singing on Tuesday night. Phillip has “crazy charisma” and incredible sound. As a singer- songwriter, it is unusual for him to get so far on Idol, because for him, his success will be all about the songs he writes. Phillip’s challenge will be to make a record both true to himself that also lives up to the hype that occurs from being on a show like Idol with all of its exposure to a wide audience. While this is true for all of the contestants, those writing their own songs have the bigger challenge.

On the judges: Jennifer Lopez is beautiful (duh! To be fair this was in response to a pretty lame question). Although the judges seemed to really like Joshua, who is admittedly great, Jimmy felt they were “fans of a lot of the kids…they shared the love around” What he really felt was the judges’ greatest contribution was the work they do on the road, hearing thousands of kids and determining who has what it takes for the show. Jimmy called this work “extraordinary” and suggested that their skill in this area in particular is what distinguishes this panel from previous years’ judges.

On the show: Phillip’s success on the show bodes well for Idol, as does the level of talent that this year’s contestants brought. He emphasized that he is not in a decision-making capacity on Idol, and didn’t seem anxious to move in that direction. He seemed to prefer to work with the musicians and to take genuine delight in their progress and success.

With all of this fresh in my mind, I tuned into American Idol with anticipation for the final performance show of the season.  Here is what I saw and heard: both Jessica and Phillip did their thing. She belted, he charmed. They both sang well, but the judges seemed to prefer Phillip over all, though Jessica had a better first song than he did. They loved Phillip’s final number which included a marching band and less actual singing than Jessica did. I didn’t get it, but the judges gave him a standing O. We’ll see what Jimmy has to say tomorrow night. My guess is Phillip wins.