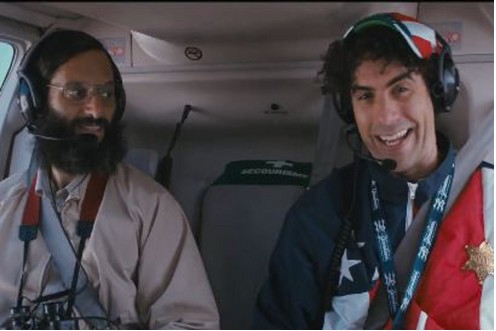 Once upon a time, a young college student found free passes to a movie based on a cult TV show that she had once watched in a 2 day long binge with her high school best friend. She rounded up her friends, and brought them to a theater, where they sat in the hallway waiting for three hours before entering a packed room filled with equally excited, mostly twenty somethings. One of the people was even dressed up in character, and spent the majority of the pre-show time making lame jokes while talking in a funny accent.

The movie started, and it was pretty clearly not anything the audience had ever seen before. Borat was funny, daring, disgusting and infinitely quotable, like the perfect intersection between Daily Show-style social commentary, Colbert Report character dedication, and gross out, goofy humor of the Will Ferrell variety. The movie instantly sparked “high fives!” and bad accents from college students across the nation. It forever changed the way my friends talked to each other (we wore out the accent and the quoting so completely that the one friend who didn’t attend the screening with us STILL refuses to see Borat because we ruined it for him). But lost in all this chatter about Borat’s surprising success was often the real content of the movie, the justification behind all the “did you shrink this woman, gypsy?” stereotype comedy, and the thing that made Sacha Baron Cohen’s big jump into the mainstream so remarkable. By the time Bruno came out a few years later, Cohen was too big a name to slyly trick yokels into believing in his antics, and the result was kind of a mess- a movie that had all the gross-out humor of Borat, but with the social satire necessarily dumbed down by both inflated expectations and Cohen’s own notoriety.

And so now, after Cohen took a few years to do excellent work in smaller roles, he returns in another outlandish, controversy-courting outing, this time scripted. But let’s get this out of the way: The Dictator is nowhere near as smart, surprising or funny as Borat. The satire that exists is mostly muted by the film’s goofy aesthetic and ridiculous caricature of a modern dictator. The film ends with a fantastic takedown of modern American politics delivered in a diatribe by Cohen’s General  Alladeen, but with that exception most of the jokes poke at easy targets (like dictators’ excess, vacuous celebrities, and organic-living brooklynites).

The movie also lacks a lot of Borat’s heart (another problem I had with Bruno). It sounds goofy, since the major set piece of the movie involved the two’s naked wrestling match, but during Borat I actually bought into the friendship between Borat and his rotund friend, Azamat. In The Dictator, all the proceedings are held at such an ironic, satirical distance that there’s not really a relationship in the film that works. I loved seeing Anna Faris getting to play a character NOT defined by how hot she is, but she’s pretty much wasted playing the goofy local organic food co-op manager.  The relationship between Alladeen and the nuclear engineer who he tried to have executed could fill the Azamat void, but the film is more interested in undercutting the traditional story beats than in allowing genuine emotion between the two. It’s not that sappy friendship storylines are essential to comedy (far from it), but the few scenes of the two friends goofing around, trying to save the world for Dictators everywhere, are some of the most fun in the whole movie.

Still, though, Cohen’s a great comedic performer whose Alladeen is actually pretty funny. If you chuckled during the trailer, then you’ll laugh during the movie. It’s a solid, Mel Brooks-lite farce, with some clever jokes. Plus, Ben Kingsley plays a completely straight-faced antagonist hell bent on selling Alladeen’s oil rights, and it’s fun to scream “YOU HAVE A FUCKING OSCAR!” in your head every time he comes on screen.