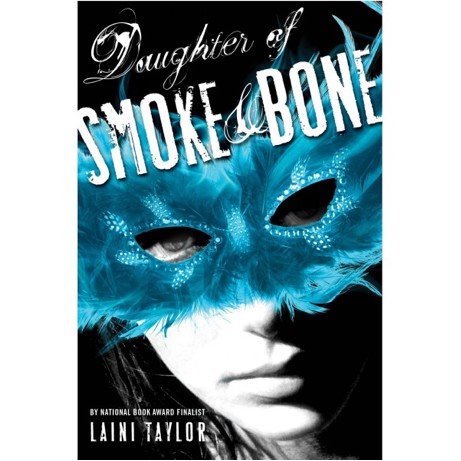 Daughter of Smoke and Bone by Laini Taylor

Young adult romance is an art form like any other, and despite the lack of respect it often gets from mainstream audiences, it is certainly capable of being just as awesome as any other genre. What I’m saying is that just because it looks like Twilight and kind of smells like Twilight, doesn’t mean it is Twilight.

And so I introduce you to the wonderfully inventive world of Daughter of Smoke and Bone. The premise, as gleaned from the blurb on the back, sounds absurd and soppy: Karou, a mysterious young art student in Prague, lives in between two worlds, one a fantastical world of magical wishes and chimaera, the other a still-pretty-fantastic world of international art schools and charismatic ex boyfriends. Karou doesn’t know the secrets of her own past, or of the mysterious tattoos that cover her body. When she meets “beautiful, haunted” Akiva, her whole universe comes crashing down, and she learns the awful, intense truth behind her constant longing for more.

I won’t get into the plot too much. Suffice it to say, the world created by Laini Taylor is one of the more inventive and well realized within this genre. Karou, also, is a well crafted female protagonist, subject to the occasional teenage girl flight of fancy but with a cool back story and solid moral compass. Akiva, far from the typical brooding bad boy, is actually more of a sensitive, if haunted soldier. Actually, written out like that, Daughter of Smoke and Bone is more like a  Nicholas Spark novel than Twilight, but the awesome mythology surrounding it helps to elevate it above such a reduction.

Daughter of Smoke and Bone is not astonishing or particularly challenging, at least not in its first installment. Instead, it is a well done and well realized version of that classic young adult romance set up.