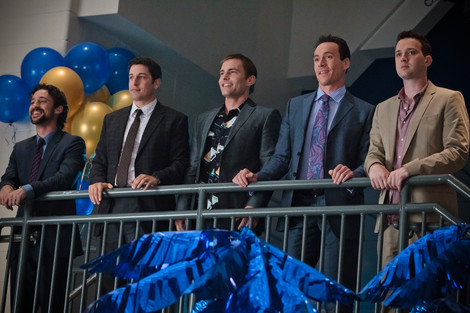 Okay guys, here’s a truth you were never expecting to hear- I really like the American Pie franchise. I mean, I don’t like it like I like the Mighty Duck franchise, but I really do like it (and let’s face it, I don’t like much like I like the Might Duck franchise). I started with American Pie 2 (because I’m just young enough, just prudey enough, and the daughter of just strict-enough parents to have missed the first one), which I don’t remember particularly well but remember finding extraordinarily funny, a little daring and worthy of watching at least 3 or 4 times. Then I saw American Wedding in the theatres. It wasn’t as good as the original sequel but it was still fun and I liked the characters enough to stay tuned (also, I was 14, so even the joke where Stifler stuffs poo in his mouth to prevent someone from eating it as chocolate was funny to me. And you readers know how I feel about poop-related humour). I went back and saw number 1 sometime in that period and, being me, thought it was too silly and gross compared with the slightly less silly and slightly less gross (though still totally silly and gross) sequels.

So when I was stranded uptown near my go-to movie theatre last week and found that I’d already seen almost everything they had playing (and couldn’t bring myself to see The Hunger Games a FOURTH time- love it though I do), I decided to try out American Reunion, just to see if my age-old fondness for the series could possibly overpower my grownup Apatow-allergic sensibility. (At least in my 90s-raised mind, the Apatow brand and the American Pie franchise have a gross-out immaturity and male-centric commonality that makes them unique, together).

To my utter delight (and slight amazement) I really liked American Reunion. Sure, there’s a certain predictability to it (though, only Cabin in the Woods has managed to surprise me this year) and that childish humour is still there (Stifler poops in a cooler. Why? I honestly couldn’t tell you), but there’s a lot of heart to the American Pie characters (especially the 5 core guys, who get the focus in Reunion over their less-developed lady loves like the always under-written Michelle). The core friendship that makes up the foundation of the franchise is key to the film’s success and the fact that the franchise overlords allowed their characters to grow up is what sets American Reunion apart from similarly boyish comedies. Two of the group’s former teen dopes are married (mostly happily, too, which is notable) and one is a father. All five of them have steady jobs, even if they are unglamourous, unfulfilling or demeaning (even Stifler is an office temp, meaning he changes jobs all the time but Stifler is Working In An Office). Each American Pie film (the theatrical releases, I wouldn’t touch those straight-to-DVD ones with a ten foot pole) does a remarkably good job of speaking to a different phase of life. When the original hit theatres, it was a uniquely frank take on highschool desperation. The second and third installments, in their own way, explored college life and your marrying twenties with similar tongue-in-cheek silliness. And American Reunion, one of the franchise’s better-received installments, is all about the settled-down disappointment of honest-to-god adulthood. The humour has grown up with the characters, while still staying true to its and their founding sensibilities. In Reunion, the old friends watch a group of high school seniors raising havoc on the beach and wonder “we weren’t like that at that age, were we?”. Anyone who saw the original American Pie knows they were, but they honestly aren’t anymore, because they grew up.

Each character’s arc shows them revealing and simultaneously grappling with that reality. Jim (and, by extension, Michelle) is having libido problems in his marriage since the birth of his son. A silly and slightly forced A plot surrounding the possibility of his cheating with his recently 18 former babysittee plays out relying on too many plot contrivances to work (no way uber-cool Michelle would flip out after one misunderstanding). But the contributions of Eugene Levy (usually so annoying as Jim’s dad) are lovely as he attempts to give Jim advice in the wake of his wife’s death (3 years ago- he’s still not sure what to do with himself without her).

Kevin has the smallest of stories as he worries about the temptations of having his highschool sweetheart Vicky around to complicate his imperfect but loving marriage. The allure of his roots is, for Kevin (and Jim, in a way), what’s making him second guess his present-day happiness. Oz, meanwhile (thankfully restored to the cast after skipping out on American Wedding), rediscovers who he is when he reunites with Heather, his highschool soulmate. Unlike Jim and Kevin, for whom adulthood brought self-assurance and purpose, Oz got a little lost in his own success- the impressive job, the hot girlfriend, the sellout slot on “Celebrity Dance-Off”… all five guys are stuck in a different adult rut and Oz’s unfulfilling success is just as revealing as the unimpressiveness of the other guys.

Speaking of which *spoiler alert*, it’s Finch who gives literal voice to the “I thought life would be more than this” theme that rides through all the characters’ complaints. He enters the film with his usual pretentious, worldly panache (calling Jim “James” for no reason, as per usual) and eventually reveals that he’s basically full of shit. I love Finch. There’s a certain awkwardness to that moment when you realize that you would pick the silliest of the acceptable four if given the choice (including Chris Klein and his Clark Kent-ness), but I absolutely would (if only because he’s the only one who can identify the pretty girl behind the bar who was not so pretty in high school). How very ashamed Finch is to work at a Staples gets to the heart of American Reunion’s “grownup problems” motif.

Stifler, as usual, is the show stealer and is, wonderfully, far more palatable than he’s previously been. The main focus of his story is his isolation- made all the more interesting when you realize that you too would leave him out just like Jim, Kevin, Oz and Finch do. Stifler’s working for Lester from Chuck (Vik Sahay, playing, as he usually does, an egomaniacal devil man) and is even less successful than the other guys who are so worried about how unsuccessful they are. But Stifler wants one thing, and that’s the one thing the other guys refuse to give him- unconditional friendship. Often the loudest guy, that obnoxious one who alienates everyone, is the person who just wants to fit in the most. Stifler’s story is just plain sad, but he’s such a determinedly fun character that he forces you out of that feeling, cause he just wants you to be having as much fun as him. It’s a great part, really, the writers have done Sean William Scott a great service by giving him more than just the go-to gags and he plays that heart on his sleeve with great conviction. You just want to give him a hug… then pull away really fast because he’s probably trying to unhook your bra.

More than anything, American Reunion is sweet. It’s got a grownup honesty and trademark humour, but mostly it’s a compelling and heartfelt story about characters who are honestly worth watching. The comedy’s not my style, but I liked it anyway and that’s high praise.