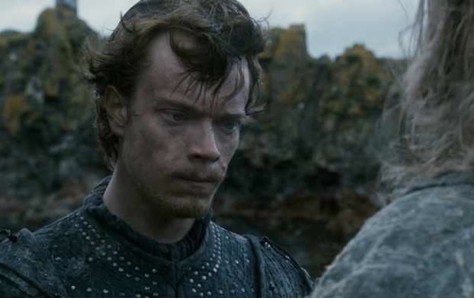 “What is Dead May Never Die”

This week’s episode of Game of Thrones is obsessed with the question of power. Saying that is kind of the equivalent of saying “this week’s Game of Thrones has a lot of boobs in it.” It’s true, of course, but it’s also true every week. This week, however, the question of power rises to new, more complicated heights. In a scene taken almost directly from the book, Varys asks Tyrion a riddle: if a sell sword is in a room with three men – one his king, one his priest, and one a very rich man – all of whom ask him to kill the others, which will he choose? In other words, is power given through loyalty (to a king), fealty (to a God), or the independent pursuit of money?

The answer, based on “What is Dead May Never Die,” may be none of the above. Power lies with whoever put the sell sword in the room in the first place.

Earlier this season, Cersei demonstrated her royal power to Littlefinger by almost getting her guards to kill him and chillingly explaining that in Westeros “power is power.” But this episode provides a counterpoint to that, in multiple cases where brute force is shown as merely a part of the picture, and actually a flawed instrument.

Of all the characters we dealt with this week, Tyrion has the most power because he is able to figure out where to put people. In a fantastic bit of plotting, Tyrion designs a test to figure out which of King’s Landings power players has been betraying Hand after Hand. He tells a different version of the same story to Varys, Littlefinger and Pycelle, and waits to see which version gets back to the Queen. He puts each man in a position to demonstrate his loyalty, and then holds the power of information. Tyrion may be a little man, as Varys points out, but he casts a big shadow.

As for Kingly power, we have Renly Baratheon, he of the charisma and loyalty, who has a huge army, a beautiful young wife, and absolutely no power. In a development that was hinted at in the books, Renly is incapable of fulfilling his Kingly duties with Margaery due to the fact that she’s not her brother. It leads to a really awkward scene where Margaery offers to call her brother in to help Renly, um, get started, and Renly looks like a terrified child. In this scene, one of them may be a King and the other his “virginal” queen, but the power lies in ritual, belief, and the common man.

Arya becomes another victim of power when King Joffrey’s troops arrive, looking for Gendry, and tear apart the not-so-merry band of misfits with whom she was traveling. But power, once again, is deceptive, and brute force is only half the battle. When the troops ask for Gendry, Arya convinces them that he is already dead. Though she ends the episode a prisoner, she has set in motion events that none of them can fully understand. That is power, of a different sort, of  a sort that Cersei and Joffrey seem incapable of understanding.

And then we have Theon, trapped in a terrifying intersection of brute force, religion, and kingly right, the perfect amalgamation of Varys’ riddle. Theon is, undoubtedly, kind of a tool. Watching him burn his letter to Robb, the last remnant of his loyalty to the Starks, should cause a groundswell of hatred toward Greyjoy. But he, more than any other character, is powerless, even without Arya’s chains or Tyrion’s constant threat of treachery. He is the victim of circumstances that cast him first from his father and then back to his father. In Varys’ riddle, he’s none of the power players – he’s the unfortunate sell sword. And though it may make him rich, or bring him to the kingdom of heaven, or earn him the King’s loyalty, that doesn’t change the fact that he is subject to the whims of the powerful.

It’s one of the greatest strengths of the series that it doesn’t conform to traditional definitions of morality or power. And in an episode like this, where that subtext becomes text, the question of the series becomes not who is the king, the priest and the rich man, but who is pulling the strings behind the scenes?