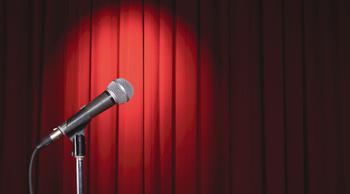 Video of the Day: Stand-Up

This isn’t really a post about theatre. But, Come On People, is seven branches not enough? Can’t poetry be filed under “books”, solitaire under “games”, dance under “theatre”, bowling under “sports”? (I jest, I don’t write about bowling. Or solitaire… at least not yet). This is me arbitrarily deciding that Stand-Up Comedy officially goes under “theatre”, at least for now. It happens on a stage, it counts as theatre. Unless it’s televised, then it’s under TV with the articles about Wanda Sykes and Last Comic Standing.

Anyway, I digress. Today’s Video of the Day (which, I know, we don’t do every day- shut up! you can’t make me feel bad about myself!) is from BU’s Funniest Student. I did not know Ari Stern was BU’s Funniest Student. I mean, I knew Ari Stern was a damn funny student that went to BU, but I somehow missed his winning the annual stand-up comedy contest. What I did know is that he’s one of the best performers in the improv troupe Liquid Fun (the top spot still belongs to their quick-witted president Shawn Musgrave) and just a generally funny guy. But today was the first time I ever heard Ari’s standup. I looked it up because I’d heard that he’d written a bit about my friend Morgan and her new boyfriend- Ari’s best friend. That’s the Video of the Day. He opens with some jokes about the MLB and tobacco and closes with an ice cream/volcano bit, but the middle section that nails Morgan’s affable nature is laugh-out-loud funny and well worth sharing with you lovely readers.

Enjoy! (and if you like it, check out some of Ari’s other routines on YouTube, because he’s kind of great).