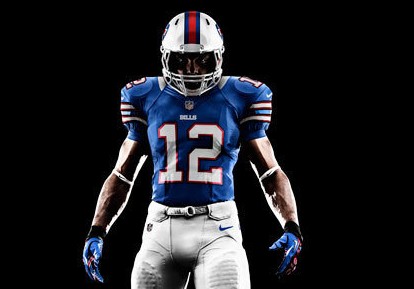 The NFL’s New Uniforms: Much Ado About Nothing

Every where I went, someone was making a big hoopla about the NFL’s new licensing contract with Nike that was going to kick in this year. A lot of my friends were eager to see the new football jerseys which were supposed to look similar to the trim, hard to grab uniforms that Nike had been creating for college football for a while now. When the pictures of the new garbs started to release online, one by one I felt a huge sense of utter disappointment.

The first problem I have with the new uniforms is how they’re cropped and tightened. When I first looked at the pictures of each new getup, I didn’t get excited but instead started to dread watching any games next season. While I can see the kind of look Nike is trying to create, this isn’t going to work for every player in the NFL. I’ll be the first to admit it: wide receivers and running backs are going to look fearsome in these new uniforms (ditto for corners and safeties). But what about the linemen? These cropped, harder to grab uniforms might cut down on the holding penalties but the tightness is going to look gaud awful on anyone who happens weigh over three hundred pounds. Every lineman wearing these tight squeezing shirts will look like a beer belly redneck wearing a wife-beater a few sizes too small. In other words, this new uniform going to be an epic failure for the image of the NFL the minute all the fat boys take to the field

Nike has never shown a shred of compassion towards how overweight people look in their gear, so I’m not surprised to see how little they care whether each lineman in the NFL is going to look like beached whale after every pileup occurs. I seriously doubt this is the kind of image Mr. Goodell and the NFL had in mind when they revealed these jerseys. Yet come September this is going to become the NFL’s reality.

Another problem I had with the new Nike jerseys (as if the previous gripe wasn’t enough), was one of originality. Now from what I had gathered by talking to a few diehard NFL fans about this, the start of a new contract with Nike meant that each team could make radical changes in their uniform without penalty. So how many teams took advantage of this chance to do something new with their uniforms? Based on the pictures I saw, just one: Seattle and they didn’t do very much with it either. The Seahawks managed to do something I didn’t think was possible which was to make a new jersey that was even uglier than the previous uniform. With the exception of the cut tightness and shape of the new uniform, the design and the colors of every other jersey across the league are pretty much the same. Talk about blown opportunities.

When I saw the uniform for the team I root for, my beloved Buffalo Bills, the last thing that went through my mind was how soon I could get my own. Chances are after seeing the new uniforms, I will likely not buy one prior to the beginning of the new season, if ever at all. As a former defensive lineman, I dread the idea of trying to squeeze my two-hundred and eighty five pound frame into one of those tightly cropped death traps. Until I see how good (or how bad) professional linemen look in these new duds, I have zero interest in investing a single dollar in a new Bills jersey. I have a feeling that many overweight people like myself are thinking the same thing, and we make up a hefty portion (pun intended) of their viewing audience.

Based on that, so far I consider the NFL’s new jerseys under Nike to be a epic failure on all counts. Both the NFL and Nike should be reproached for only using buff models to show off the brand new jerseys. Yes, wide receivers and quarterbacks are going to look epic in anything you make, but the NFL alienated a lot of their fans by not giving any of us a chance to see what the big men would look in them, making us fear the worst. Combine that and the lack of interesting changes to the uniforms and this unveiling of Nike’s new products was much ado about nothing. There is little originality here and I have a feeling they are definitely going to make me look fat. Both of those added up equals at least one NFL fan who won’t be buying a new uniform this summer.