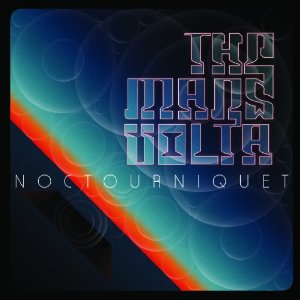 In the opening track to Noctourniquet – Volta’s sixth album – Cedric Bixler-Zavala ends hoarsely repeating the lines, “I’m a landmine / cause I’m a landmine / don’t step on me,” as the music dissolves to nothing behind him before kicking up its synth-induced chorus again. It’s a lot to take in as an opener. A weird mix of 2009’s Octahedron and the previous Bedlam in Goliath, it’s not completely clear how to take the beginnings of their new endeavor. There are familiar elements and what we’d expect from the progressive band but it’s jarring.

Cedric’s vocals and lyrical style have always been a highlight for me. His delivery, vocabulary and range is incredible almost to a point where it distances listeners. Throughout this album however, his layered presentation is at its most accessible, at its most poignant and within a tangible reality. The beauty of this album is that it focuses on tracks that have highlighted his ability at true singing instead of the cackling he can digress into at times. Songs like “Asilos Magdalena” or “Televators,” from Vicarious Atonement & De-loused in the Comatorium respectively, are spiritually revisited here thematically and wholly. Slow, echoing guitars blend over his falsetto style which lead to a very sobering experience. Most notably “Empty Vessels Make the Loudest Sound,” a beautifully done ballad about forgiveness.

That kind of exemplary work however can be undercut by some of the more straying pieces of the album. Adding too many instruments was never a problem for Volta but its seemed they went a little overkill with the some extraneous pianos. Dissonance has always been a powerful tool for the band so it was a shame to see it fall short – even if it’s momentary. Regardless, overall this album boasts one of the most sobering interactions you can have with The Mars Volta. As a listener, you’re more inclined to flatten out and be so intwined with their sound that it’s a little uncomfortable; solely due to the fact of what we’re accustomed to expect from them.