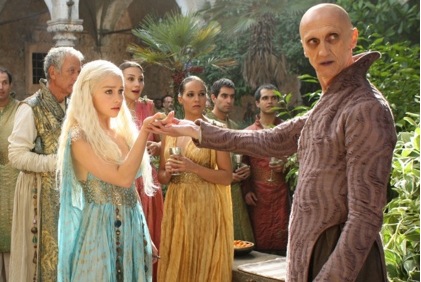 The Ghosts of Harrenhall

For the first few episodes of their second season, Game of Thrones focused on one unifying theme to help bring their episodes cohesion. The last two, however, were pulled together much more chronologically. As such, they featured way more of the characters we know and love and way more of the expensive locations that really show off the HBO production values.

I can’t tell yet if the episodes suffer for not having the profound and beautiful thematic linking of the early offerings. Certainly, I enjoyed picking apart the way that all the scenes fed into one of the many themes from the books back when that seemed to be the focus. But these last two installments have been both tantalizing and exciting, and pushed the plot forward in really significant ways. As a fan of the books, I can safely say that the show does an awesome job of condensing and expanding the books’ often painfully long form narrative.

The episode starts off with a pretty major plot jump, which I’m about to talk a whole bundle about, so let’s just get this out of the way: SPOILERS. Just as it seems Catelyn and Renly are securing a truce between the North and Renly’s massive army, BAM. Shadow Stannis shows up and stabs Renly through the chest. This is a pretty consistent George R. R. Martin theme, whereby the traditional “victory” moment is undercut by something tragic and awful happening (think that moment in season one where you truly believe Ned Stark is about to go to the Wall and start having hilarious and wonderful adventures with his bastard, Jon, only to have Joffrey chop his head off), and it’s incredibly effective here. Brienne is quickly blamed, and has to abscond with Catelyn (whose attendance at Renly’s murder makes her look a bit guilty too).

Renly’s death leaves a power vacuum, and no one works better in a power vacuum than Littlefinger, who sets about verbally seducing the Loras’s within seconds of Renly’s death. Margaery may be my favorite new character of the season (even more so than Brienne, who is one of my all time favorites in the books), and it’s wonderful to watch her and Littlefinger simultaneously weave their web of half truths and manipulations.

My other new favorite character is probably Jaqen H’ghar, the criminal who Arya saved from death by burning earlier in the season, and who now is subject to Arya’s demands for three deaths. The story of Arya’s descent from wild princess to truly messed up young woman is fantastic, and Maisie Williams is a ridiculously talented young actress. Her little smile, looking down at the dead body of The Tickler, is at turns heartwarming and horrifying. Ditto for her wonderful scene squaring off with Tywin Lannister, and the vague threat included when she tells him, “anyone can be killed.”

This episode is chock full of foreshadowing and events falling into place in ways that I, as someone who has read the books and therefore cheated, don’t want to risk going into. Suffice it to say that the stuff above the Wall and at Winterfell this episode were all very interesting, and bound to lead somewhere cool. Jon takes off with Qorin Halfhand to explore the icey wilderness. Bran sends troops to help fight Theon’s attack on a Stark outpost near Winterfell, and has terrifying prophetic dreams about men drowning around the gates of Winterfell.

On a side note, the world above the Wall has never looked so gorgeous. This season, the show shelled out to shoot in Iceland, and it shows. The towering ice sculptures are breathtaking, and an interesting contrast with both the muted grays of Winterfell and the lush colors of King’s Landing.

In the last of the amazing locations of tonight’s episode, Daenerys and her ragtag crew make it inside Qarth. Normally, the sly double talk and political intrigue is reserved for the finery of King’s Landing, but this week Daenerys carried the brunt, glad handling dignitaries eager for her dragons and turning down a marriage proposal from a rich lord who promises her the seven kingdoms. Lots of people complain about Daenerys’s story lines because they are meandering and seem so far removed from the main action (and this definitely annoys me in the books), but I love the character and her easy chemistry with Jorah Mormount. There are never easy answers for Daenerys, and I don’t know that she ever really makes the “right” decisions, but, as Jorah pointed out this week, she has a kind heart that makes her an interesting contrast to a lot of the rulers in Westeros.

One of the things I love about this show (and the books) is that it causes you to root for two mutually exclusive things. I spend half the episode thinking about what a good king Robb Stark would make, knowing full well that Daenerys would probably kill the shit out of him, given the chance. I’m still rooting for Daenerys though. And I want Arya to kill everyone who’s ever wronged her, knowing full well that she’s probably not a huge fan of Tyrion Lannister. There’s a huge theme of perception and degree inherent in these stories; no one is ever purely right (although a few characters are purely wrong, I’m looking at you Joffrey). No storyline this week better exemplified this than Tyrion’s.

Wandering through King’s Landing with Bronn, Tyrion lists the myriad ways he’s trying to make things better for all the small folk. He doesn’t want to sit on the Iron Throne, doesn’t want to shore up power for Joffrey – his only real goal is to try and limit the damage that the idiots around him are wreaking. And yet, he stumbles upon a dissident in the street, railing on his family, and reinforcing the belief that Tyrion is the “little monster” pulling the strings of the government and destroying King’s Landing. It’s a funny moment, but it’s also a poignant one, and a scary reminder of the role perception plays in bringing down power.