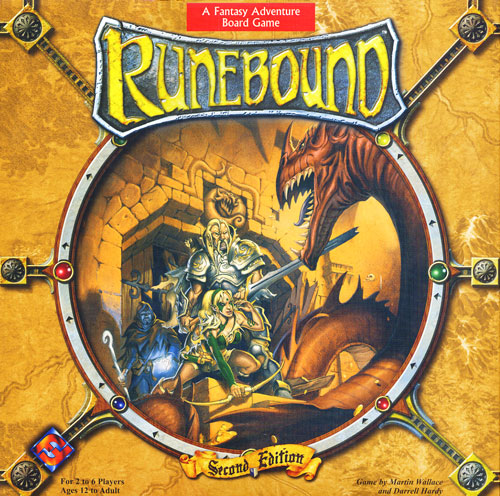 Once upon a time there was a board game called Talisman, but that’s a story for another day.  The story today is about one of Talisman‘s Robert Baratheon-esque bastards, Runebound.  The best way I can describe games like this is as analog World of Warcraft.  Players run around a board taking turns killing monsters, collecting loot, and getting stronger and stronger to take on increasingly more powerful challenges until some vague end game parameter is met- which usually means the game just keeps going until people are ready to go home or, like in one fateful evening, the power goes off.  The game is structured so one could play it on your own but adding more players definitely gives it more edge.

In the game, you play one of a set of various characters with different skills and specialties.  Some are skilled at ranged combat and skullduggery while others are walking meat shields who can take a bunch of damage or blast enemies with magic.  Others are good at jumping.  From there, the players take turns running around the board, trying to overcome various challenges which are represented by various tokens on the hex map.  These tokens are colour-coded from Green (easy) to Red (Hope you like dying) so players can decide what kind of challenge they want to go for and don’t wind up staring down the nose of a dragon with nothing but a spoon for a sword and a bucket for a helmet.  This simple system really makes the game a lot of fun as you have to decide when it’s time to risk going after harder challenges.  You could spend the entire game easily mopping up greens but it’s going to take you longer to gain experience and level and the rewards are pretty weak.  There are also various towns on the board which sell magic weapons, spells, potions, and even minions.  This is where playing with others really makes things fun because it becomes a race to go after these various challenges and gear before your so called friends grab them all up.  I’ve only ever played with two or three players but I can imagine it becomes a veritable zoo with five or six folks all scrambling for the limited resources or trying to bash each other over the head to steal their choice loot.

The mechanics are where things get a touch iffy but the reasons for them are sound.  Movement and combat make sense but it’s a bit of a thAC0 situation to sort of work out how.  Instead of rolling dice to determine how many squares you move, you roll dice with different terrain printed on each side which indicates what terrain you can move through.  Sometimes it would be nice to just say, “I move three,” instead of, “I’ve got a river, two roads, and a hill…where can I go again?”  Likewise, combat is divided into various rounds which takes a bit of practice getting used to.

There is a ton of replay value with this game as you try out different characters and face different challenges each time.  Like in any rpg, it’s fun to see your character go from a weak little newb to a walking battle tank with minions and artifacts coming out the wazoo and if it does grow stale, Fantasy Flight is more than willing to provide additional content with its many, Many expansions and add-ons.  A lot of fun.  When playing with friends, I highly recommend having another player read out your challenges to you and then reading their challenges out to them as it makes the game a lot more interactive and provides folks with something to do when it’s not their turn.  Also, it gives you a chance to practice your dramatic GM voice.  Enjoy!