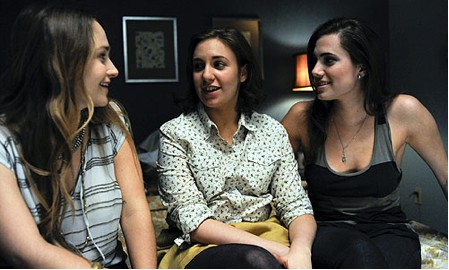 My Ruined Generation: A Pilot Watch Analysis of Girls

Cracked.com once had an article called “5 Ways We Ruined the Occupy Wall Street Generation”, written by a member of Gen X. The article explained the myriad of ways that Gen X and their Baby Boomer forefathers first ruined my generation and then complained when we turned out exactly the way they raised us. It’s a great read, and like most Cracked articles, is a witty mixture of legitimate insight and snarky social commentary.

Girls, the new half hour HBO comedy starring Lena Dunham and produced by Judd Apatow, is the perfect evidence of the article’s thesis. It centers on Hannah, a bright and perky, upper middle class white girl who went to college, worked hard, and now tries to make it in the “concrete jungle where dreams are made up”*, New York City. In the pilot episode, her parents arrive to drop the hammer: after two years of supporting Hannah’s post-collegiate dicking around, they’re done footing the bill.

It’s a moment that is simultaneously cruel and understandable. Hannah at age 24 is brattily incapable of supporting herself. She thinks it’s impressive to live on $1100.00 a month (which, let’s be honest, it kind of is in New York City), and doesn’t seem to think anything of the fact that this money is just magically appearing in her bank account. But, as Hannah asks in her confrontation with her parents, whose fault is it really that she made it to 24 without ever getting a job? The first point in that Cracked article hits this pretty well. Throughout middle school and high school, our generation was continually told to do our homework or else we’d end up working at McDonalds. I had a particularly snarky English teacher who used to tell me, every time I failed to turn in a homework assignment, that I should practice asking “do you want fries with that?” It was the ultimate threat of what will happen if you didn’t follow the rules. So whose fault is it when we hit 24, have our college degrees, and don’t think we should HAVE to take that McDonalds job? After all, that was what we were promised.

The beauty of Girls is that it is informed by the particular over-indulged narcissism of overachievers of my generation, while maintaining a witty insight into what makes these girls still interesting. Because while I may be able to understand why Hannah now feels that she is minutes away from being “a voice of her generation,” the show isn’t afraid to poke holes in this self-indulgence. Hannah’s neither a true brat nor a put upon protagonist – she’s a 24 year old smart idiot who should probably learn how to balance a check book.

As much as I thought of that article while I watched the pilot, I thought even more of another TV series that combined wry, observational humor and uncomfortably honest truths about growing up: Freaks and Geeks. I don’t want to harp on this for too long, because Girls is clearly Lena Dunham’s baby more than it is Judd Apatow’s, but the show has that same aching mixture, and, Hannah, like Lindsey Weir, feels true to the experience of growing up (although, for the record, my parents are much nicer than Hannah’s and I’ve never drank opium tea. That I know of).

I’ve gotten this far and haven’t mentioned Sex and the City, the show that Girls is inexplicably being compared to. I suppose not inexplicably. In fact, Girls itself brings up the comparison, if only to toss it out the window. The biggest thing the two shows have in common (besides their New York location) is their absolute commitment to the complicated female friendships at their core. Although the pilot focuses on Hannah (and I have subsequently mostly focused on Hannah), the other girls who surround her seem interesting and rife with dramatic potential. It’s too early, though, for me to talk about them much outside of the stereotypes they seem to embody. To go back to the Freaks and Geeks comparisons for a moment, Girls also seems like the type of show interested in taking these archetypal characters (in F&G, the stoner, the nerd, the cool bad boy; in Girls the cool chick, the rich bitch, the writer) and slowly deepening them.

The pilot isn’t perfect. Hannah’s parents are a bit too demonized, especially her mother, who has a point about Hannah’s need to be independent but goes about it in an unbelievably douche-y way. And Hannah ends the pilot just as listless as she began it, with no clear sense of where we go from here. But it is a decidedly confident debut for Lena Dunham, and the first honest portrayal of my generation I’ve seen on television. A lot of this is thanks to the fact that it is being created by people, like Dunham, who are actually of this generation, and the rest is thanks to the creative reality that seems to be the central force behind the production.

The show is also really funny, by the way.