A TV Movie: Sex and the City hits the screen 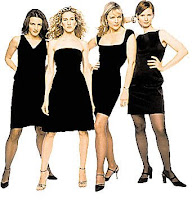 I just saw the Sex and the City movie. I watched the whole series again in anticipation (a retrospect review to come shortly) and… (ALERT: SPOILERS AHEAD!!!) … I had many of the same problems with the film that I had with the series; mostly that the men got a tough deal. My brother came home from the movie and the only thing he had to report was that the men got completely beat up for 98% of it.

For some part, I agree with him, mostly on the Big front. Just like in the TV series, every time Big (aka John James Preston) experienced a human moment of doubt or fear, Carrie would dump him and blame it completely on his “inability to commit”. After the plentiful examples (given above) of this in the show, the movie managed to somehow embellish this annoying tradition with some turquoise feathers, a lot of white flowers and a dab of over-acting. Big was a villain in Carrie’s, Samantha’s, Miranda’s, Charlotte’s, (writer/director) Michael Patrick King’s and the audience’s eyes. Luckily, Carrie has a moment of realization when audiences are given hope that perhaps she has found a way to see Big as something other than a villain and herself as something other than a victim. This “I let the wedding get bigger than Big” moment of truth, however, is instantly drowned when Carrie finds a way to somehow blame Miranda for everything. It does allow for the inevitably predictable yet rushed “happy ending”, but one brief and quickly forgotten moment of realization can hardly make up for Carrie’s (and the film’s)completely unfair treatment of Big. The man must really love her if he keeps coming back for more after that much blame being thrown his way.

As for the other 3 leading men, I didn’t have a problem at all with how they were represented.

Yes Miranda overreacted to Steve’s infidelity, but the film made it clear that she was overreacting and the other characters knew it. Carrie’s response to Big’s mistake was treated with the reverence of a judge handing down a life sentence to a heartless killer. Miranda’s was acknowledged to be unfair and was a response very true to her character. Steve may have been put through the wringer but it came from an honest place.

I really liked how Smith came off in the film (not that he ever came off as anything other than perfect throughout the series). This is, I think, where my brother got the wrong idea. To the unfamiliar eye it may seem as though Samantha’s feelings of unhappiness are being blamed on Smith. She resents that he has become the centre of her life. But Smith is never anything but sweet and considerate towards Samantha. In actuality, Samantha’s antagonist in the film is Samantha; she’s allowed herself to be pulled too far from who she really is. Sam knows this, and while she may resent Smith for being the centre of her life she never blames him for his being there, she knows it was her who put him there and it’s her who has to change it. Samantha’s is, I think, my favourite story-line in the film. She breaks Smith’s heart but she does it not because she’s blaming him for everything that’s wrong with their relationship (like Carrie) or because she’s afraid of trusting someone who’s hurt her (like Miranda) but because she is being true to herself.

and as for Harry… well, Harry hasn’t been anything but perfect since he got the tea bag situation under control and learned to put something between his ass and the white couch. In fact, Harry (though he is drastically under utilized in the film) is the sole voice cheering for Big. Harry doesn’t say that Big didn’t do anything wrong and he certainly doesn’t say that Carrie did, but he does suggest that, perhaps, Big is worthy of a little forgiveness.

Now, on to my only other real pet peeve about the film… Stanford and Anthony. All I’m going to say is 1) why did bit player Anthony get twenty times more screen time than Carrie’s final best friend and sidekick Stanford? and 2) the fact that they are the only 2 featured gay men on the show does not mean that they should be thrown together in the end. In fact, that is incredibly irresponsible character development on the part of a usually relationship-conscious show. Not only did Stanford and Anthony hate each other (as of the end of the series) but Stanford was happily dating the man of his dreams, they even had a summer home in the Hamptons together. If the writers felt the need to throw together the unlikely pair of Stanford and Anthony they should have at least given the story a little more time to be explained.

I liked the callbacks to the series.

Jennifer Hudson? I liked her, and I usually don’t like her. I liked St. Louise from St. Louis and I liked what she did for Carrie.

I liked Charlotte’s storyline about feeling like she can’t simply be happy when her friends’ lives didn’t work out as well as hers.

I LOVED the sequence when Carrie tried on old outfits from her closet. I loved the line “it took 4 friends 3 days to pack 20 years into 38 boxes”.

I liked the wedding dress sequence for the photo shoot.

I liked that there was meaty Miranda-Carrie stuff at the heart of the film.

I liked it, it worked. I loved seeing the girls again and knowing that they can still make me laugh and cry. I only wish that, after years of wishing this film into production, they could have found themselves a better script that could have really made a splash.