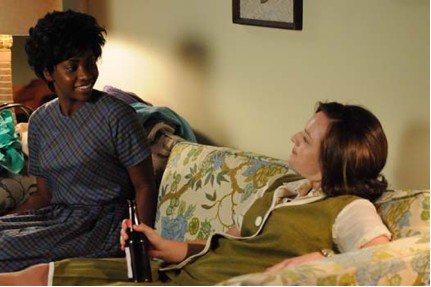 What makes a good man? What makes a bad one? And can a bad man become a good one? The latest episode of Mad Men, “Mystery Date,” tackles these questions head on. For four seasons we’ve watched our central characters struggle to wring happiness out of the lives they’ve chosen. By and large, these are not people defined by their circumstance. Don chose to be Donald Draper. Roger Sterling, he of infinite resources, chose to be Roger Sterling. Peggy Olson chose to step out of the secretarial pool. Joan chose to marry and be this woman. And none of them are happy for very long.

Since this show is about people with choice, the characters are constantly obsessed with where their choices have led them and the contrast between what they choose to be and what they may truly be. Nowhere is this contrast more obvious than in the central Don story. Flitting around the edges of all the action in this episode is the story of a serial killer who trapped 9 girls, killing 8 of them brutally. The motivations that caused this bad man to choose this course of action are only briefly talked about, but they color the discussion of all the other choices in the episode.

On the surface, not much happens to Don in “Mystery Date.” He gets a cold, he sees an old lover, and he tries to convince Megan (and himself) that he has changed beyond the need for lovers. That he has chosen to be with Megan and is not defined by some outside force. But the fever that ravages his body seems to put the lie to that assertion. Don is also an animal being, an animal who (as Megan bluntly reminds him) has constantly needed the affections of many women. When Don, sweaty and looking awful, is set upon by his former lover in his apartment, he looks every bit the terrified victim. The situation intentionally parallels that of the girls who the serial killer tore apart. But here, Don battles the self that he can’t control, that wants to act contrary to his choices. He ultimately defeats it, but only by strangling a woman to death.

I don’t know about any of you, but I didn’t believe that these scenes were reality, even before the murdering. But that didn’t take away from the genuine fear displayed by Jon Hamm in these scenes. When you exist in a world that you’ve created for yourself, then the biggest threat is not the outside forces but you.

Joan’s storyline is similarly about choice and about right and wrong. Joan’s one-time-rapist husband, Greg, returns from the Vietnam War for what, it would turn out, is a very brief furlough. At first, believing that she and her husband were merely at the whims of fate, Joan is resigned to making the best of her situation. Upon finding out that Greg chose to go back to war, Joan realizes how flimsy her created world is. Greg is choosing to be somewhere that makes him feel like a “good man,” and in so doing is proving himself to be a kind of pathetic one. Joan therefore has to choose what kind of a woman she is.

Peggy, meanwhile, is busy confronting someone who doesn’t always have a choice. I complained (a lot) last week about the show’s non-handling of civil rights, so I was pleasantly surprised to see Dawn take on a larger role in this week’s episode. Peggy, working late, stumbles upon Dawn set up to crash on the office couch. Peggy can’t understand a world where Dawn doesn’t have the option of going home. In fact, she conveniently forgets about the race riots that are tearing apart Harlem while Peggy worries about advertising copy. Dawn, however, doesn’t have that choice. She is a character largely defined by circumstance – the circumstances that led to her hiring at SCDP, the circumstances that led to her being trapped in her own office, and the circumstances of birth that make her different from every one else she works with.

Peggy invites Dawn to stay at her place, and in the congenial scene between the two of them, you can see Peggy’s glee at being the type of person who invites the new black secretary to stay at her home and even relates to her. Peggy, despite her often soul crushing day job, wants to believe she’s part of the counter cultural revolution. That’s who she chooses to be.  But in a heartbreakingly intimate moment, she can’t stop herself from wondering about the propriety of leaving her purse (freshly flush with the $410.00 she swindled out of Roger) in front of her new “friend,” and Dawn notices her hesitation. The terse note Dawn leaves Peggy the next morning reminds us of both the things we can’t chose, and the limits of our characters worlds.  Dawn doesn’t have a choice. Even in the earlier, more-friendly scenes between her and Peggy, you can see Dawn struggling to figure out where the boundaries are for her. Unlike Peggy, she doesn’t get to decide that she is counter culture and freewheeling. Especially because, at the end of the day, Peggy will still worry about her purse.

So what do our characters’ choices really mean, given what we know of the world around them changing and molding without their permission? And what power do they have over the fundamentals of their own natures? It’s not a new question to Mad Men, but it’s brought to the forefront here with shocking clarity.

If all this seems a little over-wrought, it is. With the exception of the spectacular scene where Peggy lords her newfound power of Roger, this is a very self-serious episode of a show that specializes in being self-serious. The symbolism can be a bit grating at times, especially with the Don story. But the renewed focus on themes and power dynamics revitalizes the show after last week’s lackluster effort.