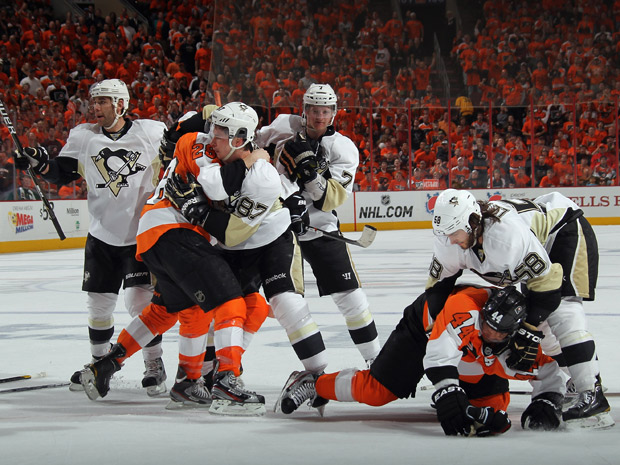 Hockey: the good, the bad, and the ugly

Gaustad and Datsyuk skate to the faceoff circle. The ref drops the puck. Gaustad wins the draw. The puck flies to the corner. The Red Wings jump after it.

A scrum ensues. Zetterberg tries to get around Weber. He gives him a shove from behind. Weber doesn’t like it.

He punches Zetterberg in the head. That’s not enough. He grabs his head and proceeds to drive it into the boards.

Time expires. Predators win. Their fans are cheering. But the question is; should they really?

With all the blood, sweat, and tears involved in any Stanley Cup playoff run, the hardest working person this year has to be NHL’s chief disciplinarian, Brendan Shanahan. With all the violent, uncalled for events that transpired this weekend, blood, sweat and tears are in abundance, making Shanahan a busy, busy man.

But far from sympathizing with him, fans should realize that Shanahan has put himself in this mess. The athletic anarchy of the past weekend is a direct result of Shanahan; or in particular, his failure to address the Weber/Zetterberg incident.

After the literal head bashing in Nashville/Detroit game one, all eyes turned to Shanahan. Everyone expected a suspension. Weber’s actions were not only potentially career-ending; it could be construed as borderline assault.

But instead of giving Weber his just desserts, Weber was sanctioned a measly $2,500, a piece of cake for a millionaire athlete.

That decision, unfortunately, set a dangerous precedent for the rest of the playoffs. Seeing such an obvious crime go unpunished, players have been playing with reckless abandon.

Setting the bar for the rest of the playoffs, Shanahan sets it incredibly low.

In the New York/Ottawa series, Senators captain, Daniel Alfredsson suffered a concussion after being elbowed to the head. Afterwards, Matt Carkner started a fight with the Ranger’s Brian Boyle. The only discrepancy? Boyle wasn’t fighting back. The result was Carkner landing multiple clean punches to a defenseless Boyle. After being knocked down, Carkner didn’t relent, continuing his cascade of punches.

Dangerous elbows? Hitting people when they’re down? This is supposed to be the NHL, not the UFC!

For the casual hockey observer, this kind of environment is electric and exciting. While other leagues, namely the NBA, are fining players for the most benign infractions, the NHL is one of the few sports that regularly has benches-clearing brawls.

But for the seasoned hockey fan, this is disgraceful. This isn’t hockey. These are mixed martial artists with skates.

In the Philadelphia/Pittsburgh series, both teams combined for 32 goals and 158 penalty minutes on 38 transgressions. Both coaches will tell you that this is an incident of indiscipline, and indiscipline, by definition, should not be a part of the game.

However, in the playoffs, hockey has its fair share of the good and the bad.

The good consists of non-hockey towns, like Los Angeles, Florida and Nashville, coming into their own and succeeding in the playoffs.

The bad comes from the failures of perennial favourites, liked Vancouver and Detroit.

These are the genuinely interesting aspects of the playoffs; the fall of good and the rise of the bad. So it’s a shame when they’re being overshadowed by the ugly.