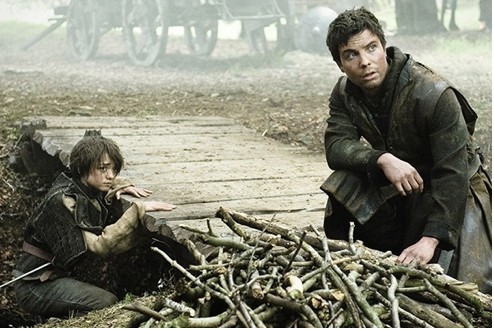 Game of Thrones “The Night Lands”

The second episode of Game of Thrones felt a lot more complete than the previous one. The renewed focus on Arya and Tyrion, currently the two best characters on the show, doesn’t hurt, but even new-to-TV Stannis and Melisandre, as well as a particularly icky scene with Theon Greyjoy, managed to set up events to  come while providing some in-episode momentum.

Let’s start with Arya and Gendry. When troops arrive from King’s Landing to try and find Robert’s last remaining bastard, both Arya and Gendry have reason to fear. It leads to one of my favorite scenes of the episode where Gendry reveals he knows Arya’s not Arry, and the two agree to keep each other’s secrets. There are so few moments of kindness, especially in Arya’s world, that I really enjoy the moments where she gets to connect with another human and actually act like an eleven year old girl.

Tyrion, meanwhile, is fighting to secure his place in King’s Landing, firing the odious Janos Slynt (which in Westeros means banishment- or more typically death) and confronting his sister head on. But Cersei’s no slouch in the intimidation department, and her monologue recounting all the many ways Tyrion has been a complete and utter failure since his birth is a great outlet for Lena Headey’s steely gaze.

Melisandre continues to burn a bloody path through Stannis’s affections, this time causing Stannis to display the most personality he ever has in the episode’s other big sex scene. No exposition this time though, just some good old fashioned carnality as Stannis gives himself over completely to the Red God, and reaffirms his commitment to being the one true king of Westeros. With the still unseen Renly, the mercifully absent Joffrey, and King of the North Robb still jostling for position, the stage is set for some unpleasantness. Add to that the rumors of a King Above the Wall, and Cersei helpfully points out we’ve now got 5 supposed Kings claiming the land (though not if Melisandre and her ridiculously red hair have their way).

One of the best themes in the first two books of A Song of Ice and Fire is the inability of nobility to conquer over cold practicality. Think Ned Stark in Game of Thrones. Living by a code of honor is a pretty easy way to get beheaded in Westeros. And the episode provides us with two crystal examples of this. The first sees Theon Greyjoy returning to the Iron Islands with every intention of brokering a peace between Robb Stark and his father, Balon Greyjoy. Theon may be kind of a tool, but he believed in the promises of the Starks and in the nobility of his blood. The scene where Theon pretends to be a big man while indulging in one of the episode’s two gratuitous graphic sex scenes is one of the best uses for sexposition* in a while. It tells you everything you need to know about Theon’s world view: he believes in himself, even when he has no reason to, and he wants to do the right thing. But within five minutes of being brutally brought down to size by his father (and creepily sexually harassed by his sister), Theon’s whole world view collapses.

In many ways, Theon is one of the most tragic characters currently bumbling around Westeros. He never asked to be traded to Ned Stark for an uneasy peace, and he was raised as a hostage by a good family. But he was never really a Stark, and now he knows he can never be a Greyjoy. One of the things that I’m looking forward to most as the season progresses is watching the way that Theon deals with the complete dissolution of his little world.

And speaking of good intentions, we have Jon Snow, Ned Stark’s heir apparent in noble-minded idiocy. From the moment incest-king Craster started explaining why Snow and the other supposedly celibate boys better keep their hands of his “wives,” we all knew somebody was going to start getting ideas into their heads. But Sam (easily my least favorite character in the books, but growing more bearable on television) had to go and listen to a woman, never a good decision in Westeros. When he hears the plight of pregnant Gilly, he brings it to the only force for good he knows: Jon. And try as he might, Jon can’t entirely ignore that familiar Stark itch to make right what is wrong. And so the episode ends with the pretty-faced badass slinking through the woods after Craster, who’s clearly into some shady business involving the boy children. Just when we think we’ve seen it all, here arrives Craster to knock Jon out and enact bloody revenge on his snooping.

And… cut to credits, in typical Game of Thrones style. This show really has perfected the art of the cliffhanger.

The real action is just heating up in Westeros, and you can hear the rumblings even as Dany spends most of the episode battling thirst and sexism in the desert. Winter is coming, even if Cersei thinks the scant forces at the wall can hold it back, and I couldn’t be more excited.

*sexposition: (n) a term used to describe scenes in which important exposition is dumped onto the viewer through dialogue between sex partners in explicit sex scenes. As used in the sentence: That scene between Tyrion and Shae in last night’s Game of Thrones provided some great sexposition.