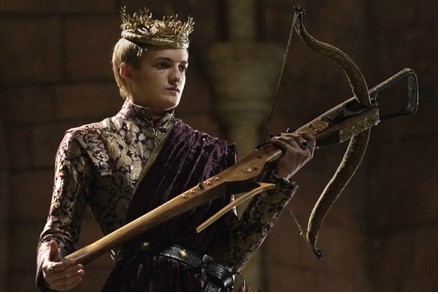 For the Night Is Dark, and Full of Terrors

What exactly terrorizes Westeros? Tonight’s episode focused on this question.

I was kind of dreading tonight’s episode of Game Of Thrones, “Garden of Bones.” Like most weeks, I was excited to watch the show, but I knew that sooner or later an episode would end exactly how this one did: with Melisandre stripping down naked and “birthing” a smokey, shadow monster hell bent on destruction.

Even more so than the dragons (which, at this point, are just cute in a CGI animal way) or the Others (which are vague enough to not seem real), the vagina-smoke monster marks the point where magic and gods are no long ephemeral to the plot of Game of Thrones. I don’t mean to imply that from here on out Westeros is Hogwarts or anything. Rather, Martin tends to use magic the way he uses romance or political intrigue: just one piece of the larger puzzle, just one more tool to help the story and, often, hinder the characters. But I like the relative realism of the story up until this point, and was sincerely nervous about how the smoke creature would be portrayed.

After seeing it, I do wonder how a person with completely new eyes would take it.  Does it seem like a radical change of pace, or a natural extension of all the weirdness surrounding Melisandre and her red god? For me, it looked about as non-cheesy as it possibly could, and I’m excited to see what sort of havoc it will wreak next week.

As for the rest of the episode’s happenings, there was a whole lot of torture in this episode. Joffrey publicly beat Sansa, Arya witnessed the torture men at Harrenhal (before Tywin Lannister showed up and put a stop to it, leading to the one time I will ever be grateful to Tywin Lannister), and Joffrey got to reach a new level of evil by torturing a prostitute Tyrion sent him. These scenes were hard to watch, but incredibly important for where they put our characters.

Every once in a while, it can be tempting to remember that Joffrey is just a boy, and a boy who’s spoiled nature isn’t really his fault. Then he beats Sansa publically and tortures hookers, and I’m right back to wishing Tyrion would smack the shit out of him again. Arya, meanwhile, has reached the point where’s she stopped seeming merely a victim of chance, and as she falls asleep chanting the name of the people who have wronged her, seems poised to take some action herself.

No Jon this week, but Robb Stark showed up, seeming uncomfortable with power and responsibility, and making pretty eyes at a feisty young lass. Catelyn is still hanging out with Renly, where she gets a visit from Littlefinger offering her daughters for Jamie’s freedom. Littlefinger, especially on the TV show, is a fantastic character precisely because he mixes truth and lies so effortlessly. While I believe he loved/loves Cat, he’s a self-serving bastard, and not hesitant to lie about Arya when push comes to shove. And he’s played with such trustworthy malice by Aidan Gillen, who is truly off the charts great this week, whether verbally sparring with Margaery or Renly, or pleading with Cat.

This week was very much a setting the stage episode of Game of Thrones, where all the characters seem to be gearing up for what’s to come. Take Danaerys, who hasn’t had a lot to do this season, and who finally lands her weary horde inside a city. Most of the episode was spent with her just trying to get the Thirteen of Quarth to let her in. By episode ends, she stands on the precipice of something entirely new. It’s safety – from thirst, hunger, the sun – but it’s also danger, throwing her directly into a world where people don’t respect or love her. Even more than shadow monsters, tonight it’s people that terrorize Game of Thrones.