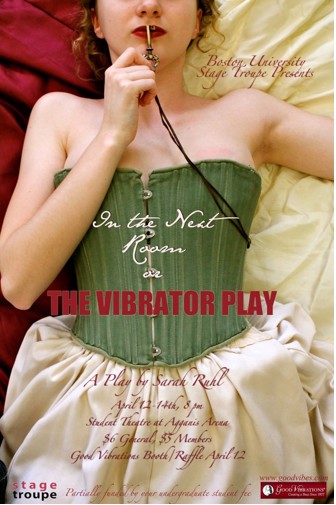 Last weekend, Boston University Stage Troupe succeeded in thrilling its audience with In the Next Room, or The Vibrator Play directed by Melissa D’Anna. I’ll mention before I go into my impressions, that I had never seen or read the play before, so I was unsure of what to expect. The very first thing I encountered was the table out front with antique vibrators. Good Vibrations, a female-oriented, sex-positive shop in Coolidge Corner, was there raffling off goodie bags (to the 18+ crowd) with unmentionables ranging from 60 to 160 dollars. This play was taking its sex very seriously and, in my opinion, in the best way possible. The atmosphere at the theater was not one of giggling scandal, but a relaxed belly laugh of adult acceptance.

The set was beautifully designed by Preston Weir – a two room spread with a half wall separating the living room from the doctor’s room. For a play going up in the Boston University Student Theater, I was pleasantly surprised by walls that didn’t look as if they would tumble down if you looked at them too harshly; and the door between rooms that was opened and shut frequently gave a satisfying sound that didn’t threaten the structure’s integrity. The costumes were period and for the most part well done, there were a few choices that were less flattering on the actresses than I would have liked, but I spend too much time with a costumer and admit to having a very high standard. The furniture and decorations fit together cohesively with the period costumes to create a nice atmosphere, and there was even an upright piano on stage that was played a few times during the show. That alone impressed me. To get a piano up into their set, and then have it tuned so you weren’t audibly assaulted by how much stress they put on it is a commendable enough feat in my opinion; that they found an actress who was willing to learn a few little ditties as well as be hilariously funny made the whole setup uncompromisingly impressive.

And hilariously funny they were. Fiona Bryson’s Mrs. Daldry had me in stitches with a well-timed face more than once; she dominated the comedy and offset the more straight-and-narrow Mrs. Givings well.  It took a lot longer for me to warm up to Mrs. Givings, played by Emily Jo McKnight. She had a tendency to get uncomfortably shrill and appeared stiff on stage. However, she handled the drama of the play superbly, even if her comedy missed the mark on occasion. In a smaller role, Becca Savoy stood out as Elizabeth. Her presence was captivating and graceful and I wanted to see more of her. Doctor Givings, his assistant Annie, their male patient Leo: they were all fantastic. The cast was small and I actually feel bad not mentioning every one of them by name – they each brought something different to the tone and even with Mrs. Givings’ occasional misstep there really was no weak link.  Aided by a fantastic script, the actors really seemed to enjoy the raucous laughs they were getting. For the most part, they maintained that elusive and electric balance between enjoying the comedy and taking it seriously. On occasion, the facial expressions or physical comedy went a little over the top for my taste, but the din of laughter probably indicates I was in the minority there.

If you’re comfortable watching loud and plentiful orgasms, both from men and women, in every position, this was the play for you.