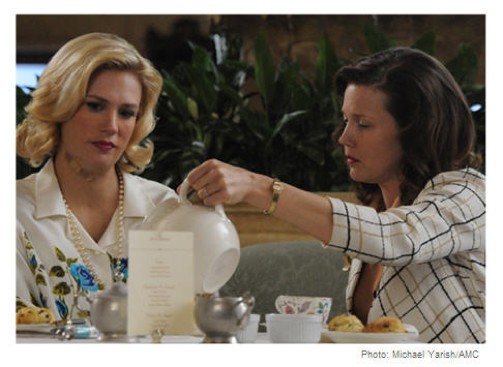 I am disappointed in the latest episode of Mad Men.

It kind of makes me sad just writing that. For the past two seasons (and some change), I have felt that Mad Men could do no wrong. For the first time in a long time, though, I’m not sure. I sincerely hope that next week I think back on this brief lack of faith and scoff.

First of all, after spending my whole review waxing rhapsodic about Mad Men’s new tackling of race, I’m a little terrified that they’re not entirely sure how to deal with it. I didn’t expect Mad Men to become all civil rights all the time; frankly, I wouldn’t want that. Don, Peggy, Roger, Joan, Pete… none of these characters would be authentically fit within that storyline. But I am incredibly disappointed that Sterling Cooper Draper Price finally gets an African American within the office, and all she does is serve as a background for Don/Dawn jokes.  Since the beginning, Mad Men has done a great job of managing to authentically portray societal ills like sexism and homophobia without BEING sexist and homophobic. But the way it has treated African American characters, while not flat out racist, has been dismissive- they are bellhops and maids and token girlfriends, without storylines of their own or inner lives.

Maybe they’re going to get there. God, I hope they are. But please contrast the treatment of the show’s first black character with the office’s first Jewish character, Michael Ginsberg (Ben Feldman, also of Drop Dead Diva).  Not only does Ginserberg arrive on the scene a fully formed character, with a clearly interesting back story, quirks, and potential future, but we also see his home life, what drives him, and a clear sense of how he’ll disrupt the office hierarchy. Dawn just sits at Don’s desk, doing little but making Harry uncomfortable. We have no sense of her future, if any, within the master plot, or even her individual character as being distinct from the many, many other women who have sat in front of Don Draper’s office.

Then again, that’s how most of the women start off who’ve sat there, so maybe I should give the show the benefit of the doubt. Allison sat there for years before she became interesting, Miss Blankenship was allowed to be interesting because she was crazy and old, and Meghan certainly didn’t make an impression until she seduced Don on his couch. Even Peggy started off by barely making a splash, Sterling-Draper wise. Maybe Dawn will be expanded in a way that feels authentic and sincere. But my greatest fear is that Mad Men is incapable of taking on the Civil Rights movement, and this inability will come to define Season 5.

It doesn’t help that I didn’t love a lot of the other storylines. Betty Francis is fat now, which makes her slightly more likeable. Mostly, though, it’s just distracting. I spend half my time thinking about how fake her new chin looks. And I didn’t really buy into her whole brush with mortality thing, although I appreciated the effort to humanize Betty after a season that saw her often forced to play the part of cartoonish villain.

For the record, I like Ginsberg a lot, and I think watching Peggy deal with the ramifications of hiring him will be interesting. Roger and Pete’s rivalry has been on a slow burn for a while now, and watching their tensions bubble over is sure to be fascinating throughout the rest of the season.

Mad Men, throughout its run, has excelled at zigging where I’ve thought it was going to zag, and convincing me that the zig was the only possible thing that could happen. It has a smart and talented writing staff that has shown itself incredibly adept at balancing the societal changes with the personal stories.  At the end of the day, I am confident that they are capable of balancing the world as we’ve loved it for four seasons with the real changes going on in the world of the 60s. But a lot of television is still given to token black characters and shallow roles, and I really need Mad Men to be better than that.