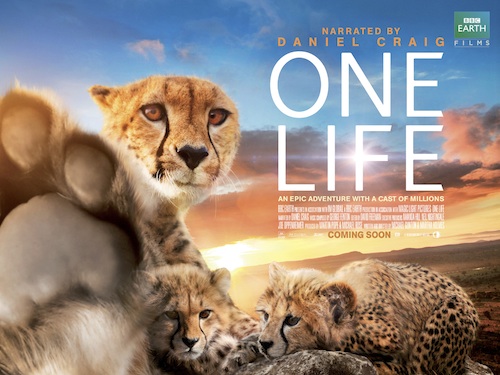 Remember the first 30 minutes of 2001: A Space Odyssey, when the primates encounter the black monolith and begin taking on human attributes and advanced levels of cognitive capability? Well, expand that episode to an hour and thirty minutes, and the result is the BBC Earth documentary, One Life. Inconspicuously narrated by Daniel Craig, One Life shatters the misconception that the animal kingdom is drastically different from humankind’s.

Like most documentary films, One Life does not have a narrative per se. Instead, the film chooses to use a story arc that we are all familiar with – the periodical milestones of human existence. To chronicle the miracles of birth, coming-of-age, adulthood, and love, the film uses awe-inspiring footage of animals from around the world to show us that these concepts are not exclusively human; that we all share a collective conscience, that we all share One Life.

From the birth of seals in the Antarctic, to romantic trysts of water birds, the film attempts to make the audience relate their personal experiences with that of the animals by personifying them. Human traits are projected onto these animals, and thanks to clever selective editing, and consistently sharp musical cues, the film succeeds in convincing the viewer that these animals truly have a story to tell, one that we as humans can understand and empathize with.

Ever thought the dating world was too competitive? Well, the film demonstrates how male stag beetles think so too. Do you have a parent that seems apathetic, but, when the chips are down, will put everything on the line for you? Well, baby gorillas have them too. There’s even a sequence in the movie that seems to validate the authenticity of a certain monkey-smashing-a-skull-with-a-bone scene from the aforementioned 2001: A Space Odyssey.

One reason why One Life excels in its storytelling is because of its truly inspired cinematography. Shot in exotic and often faraway locations around the world, the film regularly employs sweeping overhead shots that help establish the majestic and immense scope of the animal kingdom. These shots are so sublime and so well done that they will often takes your breath away. Conversely, the focus will then shift to extreme close-ups and tracking shots, giving the audience an intense sense of intimacy to the animals photographed. After getting to emotional connect with these animals, the camera will, on many occasions, slowly zoom out to emphasize the idea that, although these instances are isolated, they are part of an intertwining larger picture; one that all animal species, including humans, are a part of.

But what detracts from the film is its central, underlying message. Although seemingly innocuous to the mainstream viewer, One Life’s relentless accentuation of family, marriage, procreation and romantic love as intrinsic natural tendencies can marginalize the growing minority of people who do not share these values. When the footage is so obviously manipulated and so obviously edited, trying to have your film espouse a larger, overarching moral assertion, while using nature as a predicate, feels a bit disingenuous.

Nevertheless, One Life perseveres in large part to its stunning visual aesthetic, and cute, if often times excessively sentimental and saccharine, storytelling devices. Although largely inconsequential, Craig administers a voice-over performance that can best be described as adequate. Unlike the legendary voice of Morgan Freeman in March of the Penguins, Craig does not use his vocal talents to enhance the storytelling in any way, but since the cinematography and editing practically accomplishes that already, he is hardly expected to.

Altogether, One Life is definitely a film that’s worth watching, in the greater scheme of things, and contrary to the film’s central conceit, it’s not something one would consider as essential viewing or a milestone in one’s cinematic lifetime.