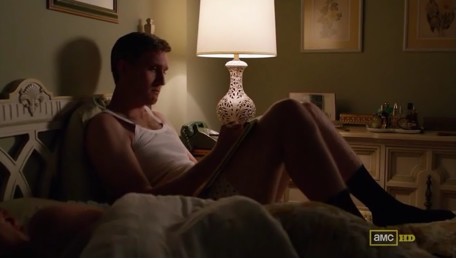 Because He Does What They Tell Him To Do

Holy shit that was a beautiful episode, a carefully orchestrated tragedy punctuated by bouts of the absurd that made me snort with laughter. This week’s Mad Men, “Signal 30,” focused on Lane, Pete and Ken, and the result is the best episode of the new season.

Pete Campbell starts out Mad Men as a character it is easy to hate. He seduces Peggy, a clear audience surrogate, and then just as quickly discards her. He sucks up mercilessly to the men around him. And when that fails, he tries to blackmail Don. He’s not exactly going to win cool guy of the year. But somewhere over the seasons, Pete also became my favorite character. He lacked Don’s charisma, Ken’s smarts and easy cool, Roger’s rich boy arrogance, but he made up for it with a striving ambition and tireless work ethic. And his marriage to Trudy often seemed like the strongest on the show (which, admittedly, is a bit like being the soberest person at Sterling Cooper Draper Price).

This season, Pete’s become a bit of a golden boy, bringing in more business to the firm, quickly supplanting Roger, and lording it over the rest. But he’s also hitting the moment in his marriage and his career where he’s afraid of what all this means. He resents the train ride into the suburb, the child who keeps him from playing his music too loud. Pete’s striving confidence has always been a cover for how deeply terrified he is of the emptiness inside him. He works so hard because he doesn’t believe in himself, and he brags about himself because he’s afraid otherwise no one will notice. This episode, we begin to see just how pathetic Pete is, whether it’s through flirting with a teenager, getting a hooker to call him a king, or getting the crap beat out of him by Lane.

I suppose Lane has always seen a bit of himself in Pete. After all, Lane also lacks the obvious ease of a bunch of his counter parts, and a lot of the storylines focusing on him highlight just how pathetic a man he is, how desperate he is for another human to respect him. He’s the British Pete Campbell, complete with occasionally paralyzing daddy issues.  So it’s no wonder that the person to finally knock Pete out of his braggadocio-inspired douchebaggery has to be Lane. If Roger had followed up on his threat to take it outside a few episodes back, it wouldn’t have been as satisfying as watching poor Lane take it out on Pete’s face. They’re both pathetic men trying to figure out what makes them special. They might also both be my favorite character.

Their storylines intertwined nicely with Ken’s story. For a couple of seasons now, Ken has been mostly in the background of scenes, mostly serving as the anti-Pete Campbell. The only things we really know about him is that he’s genial, married to Alec Mack, and an occasionally writer. Here, we see the extent to which writing is the thing that keeps Ken pure. He’s not running around cheating on his wife, he’s not deeply enmeshed in office politics, he’s not striving to be someone else – he has a fantasy world that he is compelled to go to escape all that. I was surprisingly interested in this thematic capper, especially Ken and Peggy’s friendship and Ken’s relationship with Cynthia.

Don, Roger, Joan, and Peggy all played supporting roles in this episode, which  brings me to a larger observation: the series really benefits from episodes that tighten the focus in unusual ways. Despite his reduced role, “Signal 30” was probably the most I’ve liked Don in a long time. Sitting in a brothel making small talk with the madam, looking sincerely compassionate towards Pete, or just making goofy surprised faces while two grown men through punches at each other, Don Draper was the best we’ve ever seen him. I don’t know that he can stay in this enlightened state for ever – a lot of me thinks it is just Don’s lot to be forever unhappy with what he has. But it was nice to see for an episode, anyway.