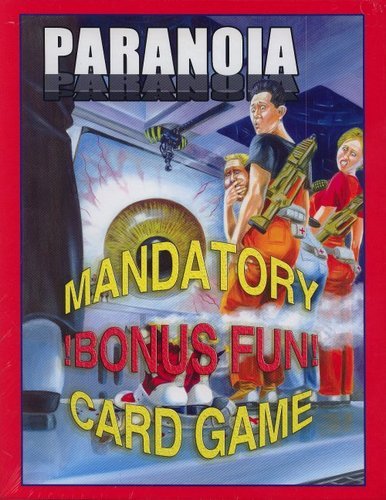 Greetings Citizen!  I hope you are enjoying the bounties of entertainment and personal satisfaction the Computer is granting you this day as the Computer does every day!  All hail the Computer!  Bless his Holy Mainframe!  To take his glory for granted would be tantamount to treason and we wouldn’t want that, now would we?  Not when there are commie mutant traitor scum lurking behind every corner, waiting to destroy the paradise the Computer grants us.  Trust no-one!  Serve the Computer!  Keep your laser handy!

Ahem, let me try that again.  Growing up eleven years younger than your next closest sibling means that as you poke around in old boxes and closets, chances are you’ll come across some strange treasures.  When your brothers are hard core gamer dorks from the ’80s, those chances explode.  One such discovery for a young, grubby-handed Leeman was a pile of dog-eared books for the Paranoia RPG game.  That’s a conversation for another day but suffice it to say, it led me to eventually snatch up the card game tie-in, Paranoia Mandatory Bonus Fun!  Card Game by Mongoose Publishing.

The card game is designed to offer a fast-paced, no prep, stripped down version of the experience one gets while playing the RPG.  Players represent the Red-coloured troubleshooters in a dystopian future where all aspects of life are controlled by the Computer.  The Computer serves as mother, father, and disintegrator all in one.  Where his robotic minions or laser cannons can’t go or might risk unnecessary physical danger or warranty expiration, he sends in his troubleshooters.  Luckily, like batteries, the troubleshooters all come in a six pack with a back up clone ready to replace his atomized predecessor at a moment’s notice.

Each of the players is striving to rise up the ranks of the internecine Paranoia hierarchy from lowly Red to Orange to Yellow and so on up until they become a coveted Ultraviolet.  The chances of them getting that far are highly unlikely however as the missions they are sent on tend to have a high attrition rate and worse, tend to reveal their treasonous predilections.  You know you’ve got a good game on your hands when you have both hit points and treason points and one of the game rounds calls for summary executions.  Much like Munchkin, the game nominally has the players on the same team but if one player does too well, it behooves the rest to tackle him to the ground.  This creates a nice level of tension where each players wants to do well but not Too well lest they be blasted into a greasy smear.  By the end of the game, whoever has the highest rank on the colour spectrum is the winner.  In our case, our winner was also completely dead and out of clones so it was something of a pyrrhic victory.  As we described it, he had a really nice plaque set up in the cafeteria.

The game moves at a decent clip and requires a healthy ego and sense of humour to not get to upset when people start teaming up against you.  Betrayal is necessary and encouraged and the game does a good job of keeping everything just ridiculous enough that no-one should start crossing their arms and making a harrumph face.  Still, I encourage folks to gauge their group of gamers before jumping in.  Munchkin is a good test; if no-one in your group gets upset during a game (something I rarely see) then this should be a good one as well.