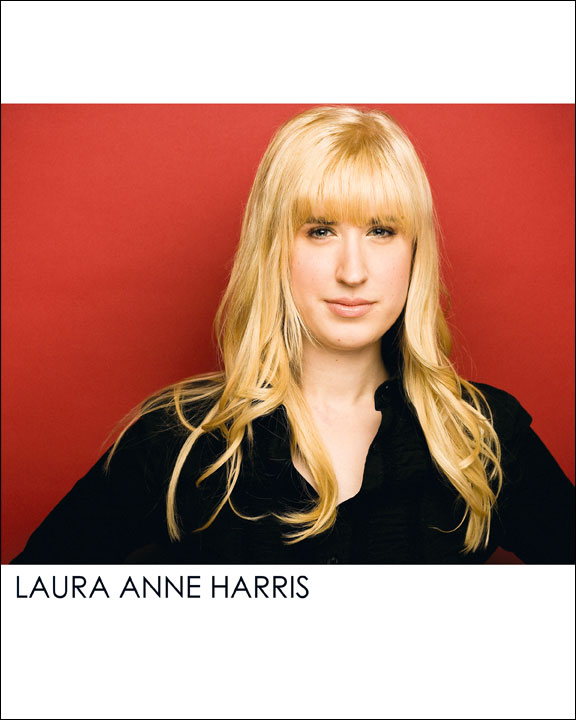 Pitch Blond was one of the biggest hits of the 2011 Toronto Fringe Festival. Laura Anne Harris created the one-woman show and stars as Judy Holliday, an Oscar and Tony-winning star with a genius IQ who specialized in playing dumb blonds. Judy’s conflicting personas helped her face the Senate Internal Security Subcommittee in 1952 when under suspicion of being a communist sympathizer. Harris’ performance earned her a Best Fringe Actress nomination in the 2011 My Theatre Awards.

What sort of theatre training do you have?
In 2007 I completed my training at the University of Victoria where I graduated with a degree in Theatre (Acting Specialty,) as well as completed the National Voice Intensive in Vancouver led by David Smukler.  For the last two years I have been training in improv, physical theatre and clown with Lisa Merchant, Adam Lazarus, Helen Donnelly and Francine Cote.

What made you decide to write a one-woman show?
I loved Judy Holliday’s story so I simply wanted to share it with the rest of the world.  This play could have been performed with other actors on stage with me, but I really wanted the challenge of creating a one woman show of her story.  Turns out I was successful with that risk!

What was it about Judy Holliday’s story that captured your imagination?
I read she decided to play her dumb blond persona before Joseph McCarthy’s Inquisitors.  I was surprised I never heard this story and I really wanted to base the play on the testimony.  Luckily I found transcripts of Judy Holliday’s hearing and I started to shape the play from that inspiration.

How much research went into Pitch Blond?
I researched for about a year and a half. Then I collected sections from her transcripts and wrote for another year.

Describe the process of developing and rehearsing the show.
After I finished my first draft of the play I decided to perform a workshop production at a Director’s Festival in Chilliwack.  After that experience I had a dramaturge by the name of Leah Jane Esau come in and help me with the script.  Then, I was really lucky, my director, Judith McDowell, allowed me to use her rehearsal space for free! You can only find free rehearsal space in Victoria, BC unfortunately! We rehearsed in a secluded ranch house for two months at least 3 to 4 times a week. In August 2007, I opened the show at the Victoria Fringe Festival and continued touring for the last four years.

How did you find the balance between Judy’s public persona and intelligent reality?
The two personas are like a switch I can turn on and off.  Judy used to say she based her dumb blond character on a staring dog.  I use the same approach when playing her ‘Bille Dawn’ bombshell persona.  The intelligent reality was actually harder for me to find clips or examples of…but there are a few instances when Judy uses her natural voice on television or radio programs.  I just kept listening and watching trying my best to nail down her two distinctive sides.

What are some of the challenges specific to a one-woman show?
I think the biggest challenge in doing a one woman show is acknowledging that the audience really is your scene partner. You must connect to the audience no matter how big or how reserved.  You need to be honest and grounded when talking to the audience and that can be a bigger challenge than most people think.

Do you have a dream project you’ve always wanted to work on?
Well I have a couple.  I’d love to play the role of Honey in Who’s Afraid of Virginia Wolf.  Also I’d love to direct the play Six Degrees of Separation.  Also I’d just love to keep writing challenging and fascinating characters for myself.

What’s up next for you?
I’m in development of two plays.  The first is a new clown inspired solo show about my Great Aunt Julie.  The second is a play I’m developing called Red/Rouge about a woman who escapes a tragedy in her life to live in Amsterdam, thus developing colourful relationships along the way.

Is there anything you’d like to add?
Thank you so much for the nomination, every little bit helps for the show and I hope to bring Pitch Blond back to Toronto!