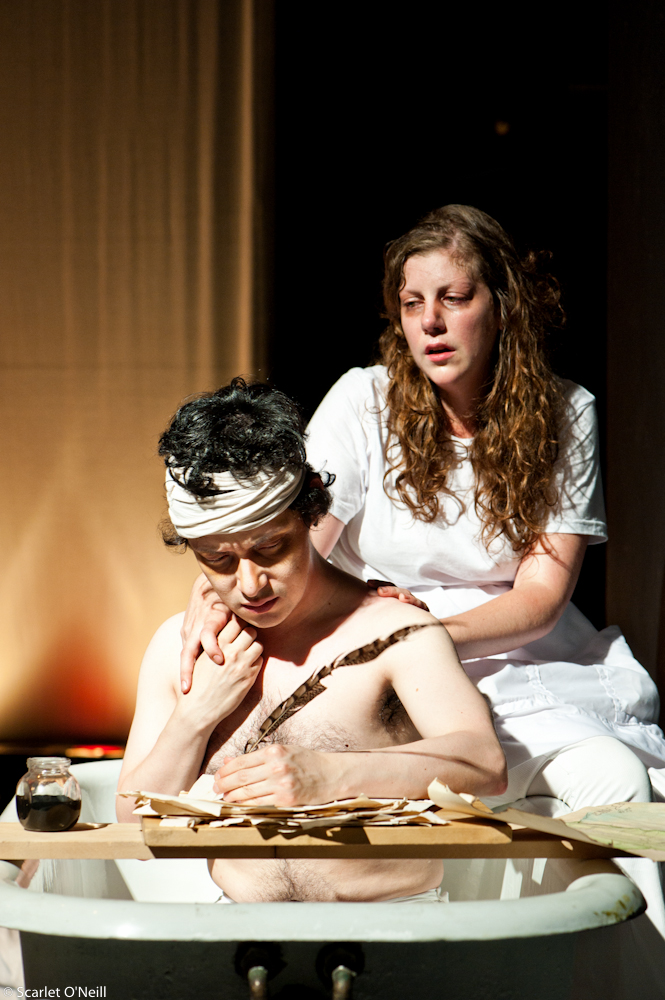 Can you remember your first experience with theatre?
Yes, my grade two teacher called my mother to ask if they could cast me in the lead role of the Christmas play.  They thought I was the only student who could pull it off.  I played The Grinch and still remember some of my lines.

What actors and actresses have always inspired you? Are they the same today?
Judy Garland, for her raw talent and ability to lose herself in performance while making her audience feel special.
Natalie Wood, for her balls to the wall risks.
Helena Bonham-Carter, for her fierceness and lack of fear when playing ugly.
Edward Norton, for his broad range and total commitment.

Those who inspire me stay with me, so yes they are the same today.

Where did you study/develop as an actress?
I started when I was about 5 years old in dance classes. Desires to perform led me to various acting classes and workshops throughout my adolescence and teen years.  Post secondary study was at The Toronto Film School where the program crammed 4 years of learning into 15 months.  When it comes to the development of my craft I would have to say that I developed and continue to develop in the school of life and occasionally at the school of hard knocks.

Do you have any dream roles you think are perfectly suited to you or something completely against type you’d love to try as a big challenge one day?
Janis Joplin. Oh how I love her energy.  Like Judy Garland, she had the ability to really reach her audience and make them feel loved.  I’ve performed songs as her and it always gets a great response.  But to play her offstage, capture the epic magnetic personality, and balance it with her vulnerability and tragic lifestyle would be a challenge I’d readily accept.

Which directors and actors have had a major influence on you throughout your career? Do you have any favourite people to work with?
I walked into the first rehearsal of Marat/Sade, looked at my co-workers who I’d be with for the next few months and immediately thought ‘Oh …*, time to pull your socks up.’  The entire cast and crew made me strive to reach them on a level I perceived as higher than my own.  I think we all kind of felt that way about each other at first.  Therefore, the Marat/Sade team has had the most influence on me.  They unknowingly forced me to break down my own barriers and grow.

What’s your favourite role you’ve ever played or production you’ve ever been in?
My favorite role would have to be Edith Beale Bouvier, Jackie Kennedy’s cousin.  She is such an eccentric and interesting character to play.  From the accent to the make-up I’ve had the most fun becoming her.

How did you get involved with Marat/Sade?
I’d worked with the Director Sarah Thorpe on a few shows and really enjoyed acting opposite her.  When the audition notice came out I jumped at the chance to audition for and experience being directed by her.  So glad I did.

Describe the rehearsal process for the show.
Pretty standard.  We worked the music, the choreography, and the scenes over the weeks at a few small rehearsal spaces.  The last few rehearsals leading up to opening were in a larger space so we were able to practice the end fight scene and the musical numbers.  Often, as Theatre folk do, we’d end up at the local pub afterward to discuss the day’s rehearsal and our character development.

Tell me about Simonne. How did you approach your dual roles as mental patient and historical figure? Did you do anything specific to prepare?
I gave Simonne a real name, a real life, and reason for ending up in the asylum.  ‘Josie’ had paranoid personality disorder due to abandonment issues and a psychotic episode that landed her at McGill.  I researched extensively about PPD and other personality disorders, reading and watching video blogs.  I delved into the disturbing history of the mental health system to get a better sense of what living at McGill would have been like.  I decided that ‘Josie’ wouldn’t know much about her character Simonne, other than the basics that Sade, the play-within-a-play’s director, would have told her.  She was Marat’s nurse, protector, and lover.  I then played the actions of Simonne with fear of discipline from the guards or Sade himself.

You did a particularly good job developing a complicated chemistry with Marat. Was that something you focused on?
Absolutely!  It was the main focus for the dual characters.  Imagine for a moment, you’re locked alone in an asylum where any touch you receive is cold, methodical, or even malicious.  You are treated like a parasite.  Any positive connection is a relief, even if it is halfway false.  It’s a sort of Stockholm syndrome really.  As the actual inmate, my character so badly wanted to be loved but was constantly rebuked, so being able to lovingly take care of Marat as Simonne eased that pain for her.  She could turn that love she felt into a vague reality for herself.

Do you have a favourite moment in the production?
Oh yes, right at the end.  The climax of the play right after the inmates have left the stage and you can still hear screams and cries of the patients and doctors.  It was more of a private moment, unseen by the audience as the illusion continued.  The energy and efficiency of the cast and crew, checking each other to make sure we’re all uninjured, watching the Stage Manager for when to slowly stop yelling, and congratulating each other on another wonderfully mad show.  All while hearing the audience erupt, knowing the proverbial curtain was being drawn.  Loved it.

What were some of the biggest challenges working on this production?
Taking on a mental illness is an actor’s dream and nightmare.  It gives you such wonderful material to play with, while making your character believable.  One can always run the risk of playing the stereotype and even insult those with that particular affliction.  The entire cast was really good at keeping this in mind as we developed our characters and would frequently turn to one another to tell us if we’d taken anything to far or out of the realm of believability.

If you could pick one definitive moment in your career up to this point, what would it be?
I can’t seem to come up with one in particular that really stands out.  Perhaps that moment hasn’t happened for me yet.

What are you doing now/ what’s your next project?
If it gets selected for The Summerworks Festival, I’ll be working on a remount of Jackie and Jack; a play about a fictitious affair between Jackie Kennedy and Jack Kerouac, written by Jim Christy and will be directed by Guy Doucette.  I would be getting the chance to reprise my favorite roll of ‘Little Edie’ Edith Beale Bouvier!

Do you have anything you’d like to add?
Nothing, other than thank you so much for the nomination and long live the arts!!