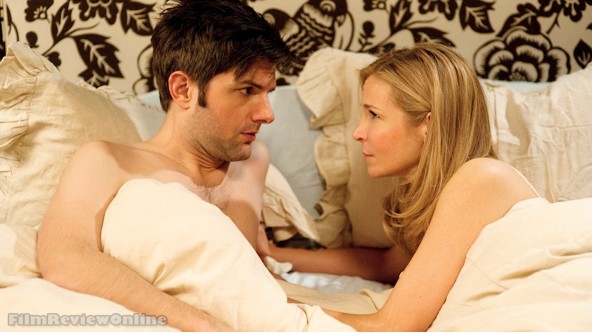 As a (mostly) unabashed fan of romantic comedies, you end up having to do a lot of apologizing. You’re supposed to couch your enjoyment of these films in the self-aware “of course, it’s JUST a romantic comedy.” Never mind that technically all films are JUST something. That’s what genre means. All films (short of maybe strange experimental films) adhere to the limits of storytelling, of plot, of some artistic demands. Some may push the boundaries of their genre or of film making in general, and those films are rightly lauded, but there’s no need to speak down to films that work within their own genre and work incredibly well.

I bring all this up because I feel confident that a lot of reviews of the hilarious and touching new film, Friends With Kids, will feel the need to point out how nicely it adheres to romantic comedy rules. I wanted to get that out of the way up front, and also explain why that does not matter, and in fact only increases the enjoyment of the film.

Good. Glad we settled that. Because Friends With Kids is a delight. Written, directed, and starring the fantastic Jennifer Westfeldt, it tells the story of Jules and Jason (Adam Scott), best friends at the tail ends of their thirties. Jules and Jason have watched all their friends from college couple up, get married, and pop out babies. Though they both want kids, they can’t stand watching the toll it takes on their friends’ relationships. Plus, they’re both thoroughly single and, for Jules especially, the clock is ticking. They decide to have a baby together, basically raising it like a divorced couple but without all the hatred and lawyers.

To varying degrees, their friends take offense, as the plan clearly comes from a place of judgment towards their relationships. One of the strengths of the movie is in how this judgment is shown to be both false and true. Jon Hamm and Kristen Wiig start off the movie playing newlyweds, but by the end of the film they are a cautionary tale about ill-conceived marriage. Hamm is ridiculously good in his relatively minor role here, and manages to imbue his complete douchebag of a character with enough sadness and humanity to really ground this story (probably not a huge surprise, since that character description could also be for one Mr. Don Draper, but he’s not just playing a less charming Dick Whitman). Showing the other side of the coin, Maya Rudolph and Chris O’Dowd play a couple dealing with the everyday reality of kids. Lots of times it tough, but their obvious affection for each other makes it worth the days when they just want to throw things at each other.

The friends are fun to watch and surprisingly underplayed given that they’re all bigger names than the stars of the film. But they mostly serve as funhouse mirror versions of the future through which Jules and Jason view themselves. As one can imagine, given my earlier spiel about romantic comedies, the movie concerns itself primarily with how having a baby together changes the relationship between the two leads, and what it reveals about their characters. When you throw in two love interests to the already crowded mix, Jules and Jason are forced to confront how important they are to each other, and the limits of their relationship as they have defined it.

Adam Scott is pretty amazing here, by the way. I was already in love with him, of course, but Jason is a lot more than a Ben Wyatt rehash. Or maybe I should say less than? Jason is an unrepentant womanizer, with a self-described affinity for big boobs and not much else in his lovers. He’s fascinating, witty, and caring in his relationship with Jules, but with every other woman in his life he’s, frankly, shallow. It’s hard to make someone as adorable as Adam Scott convincingly kind of a d-bag without losing the audience’s sympathy, but Scott nails it. He manages to make it believable that, somehow, this man really never took the one woman who stuck around in his life seriously, and that is an even harder feat.

The true rock star of the film, though, is Jennifer Westfeldt and her character of Jules. Many romantic comedies, especially those dealing with women in their 30s, feel the need to go overboard to convince us that this character would actually be unattached so late in life. It’s an incredibly outdated need; I certainly don’t need the movie to bash me over the head with the idea that “she’s too busy for love!” or “she’s too weird for love!” or whatever to believe that sometimes, that’s how shit works out- you find yourself creeping up towards forty with no husband in sight.  And Jules is a smart, fun, and attractive woman, who is relatably struck by insecurity at times, but not some romcom cliché bundle of nerves and slapstick prat falls. Westfeldt is a gorgeous woman, but she makes Jules feel so real that we believe her when she says, “I clean up nice, and I have nice hair,” in argument against her own attractiveness. It makes the story all the more heartbreaking when Jason fails to see past Megan to the woman he was never able to live without.

And it’s that last point where the movie is particularly beautiful. The story spans over six years in these characters lives, and they take their time getting to the ending. It may be a foregone conclusion (and anyone who’s watched Friends With Benefits or When Harry Met Sally will recognize the familiar beats to the relationship), but it is an EARNED foregone conclusion, surrounded by a lovely story.

Oh yeah, the movie is also really funny. It doesn’t feel the need to be filthy just for the sake of filth, but it is surprisingly straightforward about sex, childbirth, friendship and children. And with a cast of actors this funny in their own rights, many of the scenes are as uproarious as anything else out there. It just happens to also be encased by a lot of heart.